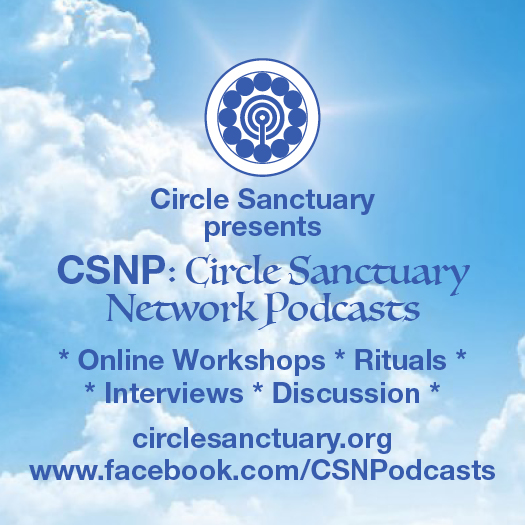 Podcasts from Circle Sanctuary, connecting all who follow nature-centered paths around the world broadcast on Blog Talk Radio.

Connect to, listen live or download past podcasts on the Circle Sanctuary Network Podcasts network:
http://www.blogtalkradio.com/csnp

Programming Through the Week:

Every Sunday at 7:00 pm Eastern

May 1, 2022:  Powers of Beltane
Connecting with Bringing in the May customs and the Greening and Flowering of the Land at Beltane time for personal and community healing and wellness.

May 15, 2022:  Full Moon Magic
Ritual ways to attune to and work with the powers of Full Moon time for healing, wellness, and spiritual wisdom.

May 29, 2022:  Dark Moon Magic
Ritual ways of personal discovery and transformation during the time of the Dark Moon.

June 12, 2022:  Sacred Sun Rituals
Some ways of attuning to and communing with the Sacred Sun with rituals, chants, and meditations.
Encore of Nature Spirituality from August 4, 2021

June 19, 2022:  Summer Solstice Around the World
Celebrating Summer Solstice with customs, symbols, sacred stories, and festivals across cultures and through time.
Encore from Nature Spirituality from June 16, 2021

Why should Friday's have all the fun?  Go crazy on Mondays with Laura Gonzalez on "Lunatic Mondays" ... Anything can happen!!!

May 9, 2022:  Lunatic Mondays ~ Chris Allaun ~ Author
On this episode Author Chris Allaun will be chatting with Laura Gonzalez about the upcoming deluxe version of Underworld and Deeper into the Underworld.

May 16, 2022:  Lunatic Mondays ~ Social Justice Series ~ Domestic Violence Awareness
DV and intimate partner violence is still alarmingly prevalent in our national and local communities, and we still have inadequate and antiquated systems of support. Laura and Jake will talk about features of DV and Intimate Partner Violence, some methods of harm reduction if you’re in a violent relationship, and some ideas for solidarity and support of those who can’t even feel safe in their own homes or living spaces.

May 23, 2022:  Lunatic Mondays ~ Wendy Rule ~ Musician
On this episode Wendy Rule will be chatting with Laura Gonzalez about her participation on PSG, touring, and a few surprises!

May 30, 2022:  Lunatic Mondays ~ Celia Farran ~ Musician
On this episode Celia Farran will be chatting with Laura Gonzalez…….. oh! who are we kidding, you put the Red Haired Everyday Goddess and the Blue Witch together, anything WILL happen. You have to be there!

June 13, 2022:  Lunatic Mondays ~ Spiral Rhythm
On this episode the members of Spiral Rhythm will be chattign with Laura Gonzalez about their musical participation and workshops on PSG adn also, future projects and events!

June 20, 2022:  Lunatic Mondays ~ Social Justice Series ~ LGBTQ+ Pride
LGBTQ+ pride started out for many people as a way for those of us  who were shamed and rejected by dominant culture to declare and celebrate our existence and survival against cruelty and marginalization. Nowadays, Pride celebrations have become quite commercialized. There are obvious benefits to greater acceptance and inclusion by some corporate sectors, but assimilation brings inequities and challenges that are often overlooked. Jake and Laura will talk about "rainbow washing" and who benefits from intersections between Pride and capitalism.

June 27, 2022:  Lunatic Mondays ~ Vironika Wilde ~ Author
On this episode author Vironika Wilde will be chatting with Laura Gonzalez about her book “Love & Gaslight”.

July 11, 2022:  Lunatic Mondays ~ Storm Faerywolf ~ Author
On this episode author Storm Faerywolf will be chatting with Laura Gonzalez about his book “The Satyr’s Kiss”, activism and intersectionality.

July 25, 2022:  Lunatic Mondays ~ Michael Herkes ~ Author
On this episode author Michael Herkes will be chatting with Laura Gonzalez about his book “Astrology for Witches”, devotion, identity and of course GLAM!

May 3, 2022:  Carmen Turner-Schott
Curious about Astrology and would like to know more about your sun sign, including self-care affirmations to optimal strategies for healing and transformation.  Join us on Circle Talk as we chat with author Carmen Turner-Schott about her book, Sun Signs, Houses & Healing.

May 17, 2022:  Alise Marie
Join us on Circle Talk as Alise Marie teaches us how to explore the power of nature by crafting plant-powered elixirs, oils, and creams to achieve ageless beauty and self-confidence that is our birthright.  Her book, The Beauty Witch's Secrets is our guide to uncovering these timeless secrets.

June 7, 2022:  Arthur Hinds
Join us on Circle Talk as we chat and listen to the music of Arthur Hinds , who is a featured musician at this year’s PSG. Blending stories from Celtic myth and legend with songs drawn not only from Celtic and American folk traditions but from his own inspiration, Arthur takes his listeners along on a spell-binding journey to other times and places and also into the universal human spirit.

June 21, 2022:  Lisa Wagoner
In these turbulent times, keeping a sense of positivity can seem like an unattainable feat. Tonight, on Circle Talk, we will be talking with author Lisa Wagoner about her book, “Positive Pagan which will show you techniques to create a core of positivity that will improve your magickal practice and life.

July 5, 2022:  Diego de Oxóssi
Join us on Circle Talk as we discover the power, magic, and secrets of Afro-Brazilian herbal witchcraft. Diego de Oxóssi will be discussing his new book, “Sacred Leaves: A Magical Guide to Orisha Herbal Witchcraft.

July 19, 2022:  Lesley A Morrison
Would you like to learn how to achieve balance, fulfillment and magic in your home? Join us on Circle Talk as we chat with Lesley A Morrison about her new book, “In the Spirit of Home,Practical Ways to Create Your Perfect Haven”.

Explorations in Nature Spirituality and practices to connect with Nature through study, ritual, discussion, and more!

Every Wednesday at 8:00pm Eastern

May 4, 2022:  Earth Rituals
Sacred work with the Element Earth through invocations, incantations, meditations, imagery, folkways, and other forms of ceremonial practices.

May 11, 2022:  Air Rituals
Sacred work with the Element Air through invocations, incantations, meditations, imagery, folkways, and other forms of ceremonial practices.

May 18, 2022:  Fire Rituals
Sacred work with the Element Fire through invocations, incantations, meditations, imagery, folkways, and other forms of ceremonial practices.

May 25, 2022:  Water Rituals
Sacred work with the Element Water through invocations, incantations, meditations, imagery, folkways, and other forms of ceremonial practices.

June 1, 2022:  Sacred Sun Places
Some ancient and contemporary Temples, Stone Circles, Pyramids, and other Sacred Sites aligned with the Sun.  Creating and working with a Sacred Sun altar at home.
Encore of Nature Spirituality from August 18, 2021

June 29, 2022:  Sacred Sun Divinities
Multicultural explorations of Solar Goddesses, Gods, Animal Spirits, and other Divine Forms across time and around the world.
Encore of Nature Spirituality from August 11, 2021

Moon Magic with Jeanet and David Ewing (RedWolf and BitterRaven)

Celebrate the mystery, myth, and magick of the moon!  In the early half of each month we will explore concepts and practices of magic associated with the full moon each month of the year.  This will be followed by a new moon ritual in the second half of the month.

April 28, 2022:  New Moon Beltane Ritual
Welcome to Moon Magic! As we enter the month of May we are changing our show format with rituals at or around each new moon.  In this episode, we will celebrate the new moon and Beltane with a ritual using balefire for purification, protection, and prosperity.

May 19, 2022: The Magic of Trees
Spring is a time when many trees have begun to flower in North America and Euorpe.  This can be a wonderful time to reconnect with our favorite trees after a long Winter.  In this episode, we will discuss trees native to the northern hemisphere, their magical properties, and how to incorporate tree spirit helpers into magical workings, rituals, and more.
This particular discussion was scheduled for April 2022 but had to be re-scheduled due to both hosts being ill with COVID-19 at that time.

June 2, 2022:  New Moon in Gemini Ritual
As the first of our New Moon Ritual podcasts, we will focus each month on the astrological sign when each new moon appears.  This month the new moon of May is in Gemini, which is ruled by Mercury and is associated with the element of Air.  In this show, we will lead a New Moon Ritual to set our intentions for increasing our creativity, connections, and speaking our truth.

June 16, 2022:  Summer Solstice Stone and Crystal Magic
Summer Solstice is a time when the Sun is at its zenith in the Northern Hemisphere and the days are the longest.  For many, the brightness and heat of the Sun is associated with the element of Fire.  In this show, we will discuss gemstones and crystals associated with the element of fire, and how to incorporate them in spellwork, rituals, and meditations to connect with the energy of Summer.

January 21, 2022:  Green Faith Powers Up With Amy Brooks
Amy Brooks, US Organizer for Green Faith International talks about the Green Faith story, from idea to global movement, and main initiatives for 2022 ahead.

February 18, 2022:  Don't Look Up with Ben Bear
Ben Bear shares reflections from Gen-X, Gen-Uh, Gen-Y, and Gen-Z about climate crisis and what facing the future means to younger generations.

March 18, 2022:  This Paradoxical Moment and Making it Count
Rev. Char Bear is joined by two transformational leaders in the digital era, Lisa Friedman, Ph.D and Herman Gyr, Ph.D to discuss the dynamics of this paradoxical moment in human history and how to make it count.

May 20, 2022:  Is Nuclear the Next Energy Surge?
Campbell Scott, Ph.D. Fellow with the American Physical Society, former assistant professor at Cornell University, career scientist and researcher joins Rev. Char Bear in evaluating the current calls for more nuclear energy as a transition away from fossil fuels.

June 17, 2022:  What Everyone Needs to Know About Global Warming
Circle Sanctuary ministers, Rev.s Andrew and Charlotte Bear provide a nuts and bolts existential overview of what is global warming, how it is caused, what is the crisis, how it impacts all life support systems on the planet, and what we all need to do about it now.

July 15, 2022:  Pagans in the Military and Climate Change
July Blue Marble will discuss Pagans in the Military and Climate Change.  Guests include current era military members of Circle Sanctuary, Rev. James Jufer (US Army) and MTP candidate Alison Kline (US Airforce).  We will be responding to how the DOD is elevating climate change as a national security priority, integrating climate considerations into policies, strategies and partner engagements.