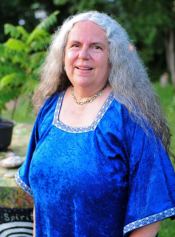 For more than thirty years, Rev. Fox has served as one of the elders, religious freedom activists, and public media spokespersons for the Wiccan religion and related forms of contemporary Paganism and Nature religion, nationwide and internationally.

Rev. Fox's professional life also includes being a guest speaker at conferences, colleges and universities, churches, retreat centers, high schools, civic groups, wellness centers, book stores, festivals, and other venues, and she has traveled internationally as part of her speaking work. Her writings and photographs on spirituality, psychology, herbology, folkways, genealogy, and other topics have been published in a variety of books and periodicals as well as on the internet. She is the founding editor of CIRCLE Magazine and the Circle Guide to Pagan Groups. She is author of the Goddess Communion handbook and the research study: When Goddess is God. Her audio recordings include Sacred Cave Ritual and Magical Journeys.

Born in 1949 in Arlington, Virginia, Selena Fox is an American citizen with ethnic roots extending to Scotland, Wales, England, Ireland, Germany, Switzerland, France, Sweden, Norway, and the Cherokee (Tsalagi) tribe of Native America. She is descended from some of America's earliest European settlers, including Quakers, Puritans, Sabbatarians, Baptists, Lutherans, Roman Catholics, and others who settled America in the seventeenth and eighteenth centuries for religious freedom reasons. Religious study, spiritual practice, and service have been central throughout her life.

Her interfaith work has taken many forms and is on-going. For more than forty years, Rev. Fox has been active in interreligious social justice endeavors, including participation in local, national, and global actions and organizations working for civil rights, world peace, environmental preservation, and religious freedom. In addition, as minister and counselor, Selena works with individuals, couples, families, and communities to peacefully resolve conflicts rooted in religious and cultural differences.

As director of Circle Sanctuary's interfaith ministries, she has designed and facilitated many interreligious ceremonies and programs, including the public multicultural Winter Solstice Pageant held each year at First Unitarian Society in Madison, Wisconsin.

Rev. Fox is a regular participant in the Madison Interfaith Dialogue group that meets monthly at the St. Benedict Center. In addition, she is presently serving as President of the Greater Madison Interreligious Association which emerged out of the Faith and Order Commission of the Wisconsin Council of Churches. Rev. Fox has been a guest minister and speaker on interfaith Ecospirituality topics in various churches across North America, including Unitarian Universalist, Roman Catholic, United Church of Christ, Methodist, and others.

Rev. Selena Fox has been part of numerous interfaith educational media programs, locally, nationally and internationally, including appearing on radio, television, and film. She contributed to On Common Ground, a multi-media CD-ROM on religious pluralism in America, which emerged from the Pluralism Project of Professor Diana Eck, Ph.D., of Harvard University. In addition, she has been an academic consultant on research projects and publications in a variety of fields, including religious studies, psychology, anthropology, history, law, and medicine. In 1995, she co-founded the Nature Religions Scholars Network, which in 2005 became the Contemporary Pagan Studies Consultation of the American Academy of Religion.

For many years, Rev. Fox has served as a consultant on Wiccan religious accommodation issues to chaplains in the US military, corrections, colleges and universities, hospices, mental health clinics, and hospitals. She is among the religious leaders appointed to and presently serving on the Religious Practices Advisory Committe to the Wisconsin Department of Corrections. She also has served as an advisor on Wiccan, Pagan, and Nature religions religious accommodation issues to the Pentagon and US Department of Justice.

As part of her work, Rev. Selena Fox is active in the preservation of ancient and contemporary sacred sites of many religions. As Executive Director of Circle Sanctuary Nature Preserve she oversees its ritual sites, including an ancient one that is on the National Register of Historic Places.

More information about Rev. Selena Fox and her work is on-line at http://www.selenafox.com