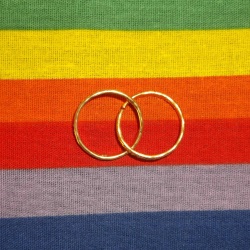 Pagans are among the many who are taking part in Marriage Equality Support events this week in Washington, DC and across the nation, as the Supreme Court of the United States hears two cases on this issue.

Circle Sanctuary Senior Minister Rev. Selena Fox will be taking part in three events in Washington, D.C. and will be hosting a special Pagan Community forum on internet radio on this civil rights quest.

Selena has been active in the quest for LGBTQ civil rights for more than forty years and was co-founder of the College of William and Mary Lambda Alliance (previously known as Gay Liberation) in 1971.  Selena conducts same sex marriage rites and handfastings as part of her Pagan wedding services available through Circle Sanctuary.

Prayer of Love, Freedom, Justice, and Equality by Selena Fox

Selena and three Washington, DC area Circle Sanctuary Ministers, Tristan and David and Jeanet Ewing, will be among those taking part in this rite being organized by David Salisbury on the steps of the US Supreme Court building.

Selena will be among the religious leaders speaking at this national interfaith service.  She will be doing one of the opening prayers and also will be among those blessing same sex couples during the service.

The service will begin with drumming facilitated by Tigre and a blessing of the quarters by Tristan and several other Pagan leaders. Interfaith organizer and Radical Faerie Eric Eldritch is part of the Interfaith Prayer Service Committee planning this event.

This event is free and open to the public.  Space is limited and must be reserved in advance - register on-line: http://equalityprayerservice.eventbrite.com.

At the conclusion of the service, join the procession to the U.S. Supreme Court building a few blocks away for the rally.

Join thousands of supporters of Marriage Equality and wear RED to show your support.  The United for Marriage Rally also will take place on Wednesday at the same time and place.

On this special live broadcast from Washington, DC, Selena and some of the Pagan leaders taking part in the Marriage Equality events at and near the US Supreme Court will share perspectives and experiences.  This show will include a Community Forum in which listeners can share comments, questions, and viewpoints via call-in and live chat.

About Marriage Equality and the Prop 8 and DOMA cases being considered by the Supreme Court of the United States this week:

Selena will be posting photos and updates via social media: