On September 25, 2005, with honor, Sgt. Patrick D. Stewart, 113th Aviation, D company, Mustangs, of the Nevada National Guard, gave his life for his country. He was killed in action in Operation Enduring Freedom. Mustang 22, the Chinook helicopter he was in was shot down in Afghanistan by Al Quada terrorists.

This is his story.

EVERYONE HAS A DREAM

WE ALL WORK HARD TO MAKE THE DREAM COME TRUE

THERE ARE SOME THINGS NO EYES SHOULD EVER HAVE TO SEE

THINGS DON'T ALWAYS TURN OUT THE WAY WE EXPECT

SOMETIMES LIFE IS NOT FAIR

THIS IS DISCRIMINATION AND IT'S AGAINST THE LAW!

"Congress shall make no law respecting an establishment of religion, or prohibiting the free exercise thereof" 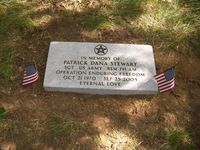 QUEST SUCCESS! Thanks to everyone who responded to this and our other calls for support in the Veteran Pentacle Quest.

On April 23, 2007, the US Department of Veterans Affairs added the pentacle to the list of emblems of belief that can be included on the grave markers it issues. This was part of the settlement of the federal lawsuit, Circle Sanctuary vs. Nicholson. Sgt. Stewart's pentacle marker was immediately produced and it arrived at Circle Cemetery on May 1, 2007. It was dedicated on Memorial Day 2007.