A Year of Veteran Pentacle Grave Markers Across the USA 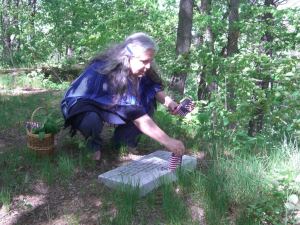 On April 23, 2007, the US Department of Veterans Affairs (VA) finally added the Pentacle, symbol of the Wiccan religion and related forms of Paganism, to its list of emblems of belief that can be included on the grave markers it issues to honor deceased veterans who have served in the US military. The Veteran Pentacle Quest lasted nearly a decade and met with success as a result of the settlement of the Circle Sanctuary vs. Nicholson federal lawsuit, filed in the US District Court of the Western Wisconsin District on November 13, 2006 by Americans United for Separation of Church and State, representing Circle Sanctuary and others.

In addition to authorizing the Pentacle for use on gravestones and other memorial markers, the settlement also required the VA to expedite the issuing of veteran grave markers with Pentacles for pending requests, and on May 1, 2007, the first VA-issued markers with Pentacles arrived at cemeteries. Two of the markers arrived at Circle Cemetery, located at our church's headquarters, Circle Sanctuary Nature Preserve, near Barneveld, Wisconsin. These were in the form of recumbent grey granite markers. One honored Sgt. Patrick Stewart who had been killed in Operation Enduring Freedom in Afghanistan in September, 2005 and the other honored PFC Jerome Birnbaum who had served in the Korean War and who died in November, 2005. Stewart's widow, Roberta Stewart, of Nevada, and Birnbaum's widow, Karen DePolito, of Utah, are Circle Sanctuary members who were among the plaintiffs in Circle Sanctuary's lawsuit against the VA.

On May 1, 2007, two markers also went to Arlington National Cemetery in Virginia near Washington, DC. These markers were in the form of upright white marble headstones. One honored a Wiccan couple, PFC Abraham Kooiman, a veteran of World War II, who had died in December, 2002, and his wife Rosemary, who died in March, 2006. The other honored Jan Deanna O'Rourke, a Wiccan who was the spouse of Army Captain William O'Rourke. In this case, the Pentacle was on Jan's side of the marker and a Christian Cross for her husband was on the other side.

In the weeks and months that followed the arrival of these first four markers, the VA issued additional veteran markers with Pentacles. I assisted some families with the application process and facilitated dedications of some of the markers, including three at Circle Cemetery on Memorial Day. On the 4th of July, I facilitated the public dedication of the O'Rourke headstone and in August, the private dedication of the Columbarium marble niche marker for John P. Graff at Arlington National Cemetery. On December, I facilitated the public dedication of a recumbent marble memorial marker for PFC Stephen P. Snowberger, III at his family's private cemetery near Lexington, North Carolina. Snowberger was killed in combat in Operation Iraqi Freedom in 2006 and was a member of the Sacred Well Congregation, which supported Circle Sanctuary's efforts in the Veteran Pentacle Quest.

In commemoration of the one year anniversary of the Veteran Pentacle Quest victory and the issuing of Pentacle markers, I made a Freedom of Information Act request of the VA regarding the Pentacle headstones and other markers issued thus far. Just prior to May 1, 2008, I received from the VA a packet of seventy-eight pages of pertinent documents. In perusing these materials, I discovered that VA-issued Pentacle markers are now across the nation in cemeteries in California, Colorado, Florida, Maine, Minnesota, Nebraska, New Hampshire, New York, North Carolina, Oklahoma, Tennessee, Texas, Virginia, and Wisconsin. Also counting Nevada, which has in the Northern Nevada Veterans Memorial Cemetery a bronze plaque with Pentacle for Sgt. Stewart issued in the Fall of 2006 by the Nevada governor, this brings the number of states with government-issued Pentacle markers to fifteen.

In the year since adding the Pentacle to its list of emblems, the VA has issued twenty-six veteran grave markers with Pentacles. Two dozen are for deceased veterans, and of these, one, the Kooiman headstone at Arlington National Cemetery, is for a veteran and his wife.

The other two markers are interfaith with the Pentacle signifying the faith of wives buried with their veteran husbands in federal cemeteries. In addition to the O'Rourke headstone at Arlington National Cemetery, there is a bronze plaque at Riverside National Cemetery in Gustine, California with the Star of David for Air Force Major Harold Hecht, who was Jewish, and a Pentacle for Betty, his wife, who was Wiccan. Having worked directly with the Hecht family, I know that they were relieved when the Pentacle was approved for use on markers, because they finally could order a plaque with both emblems on it.

Some of the markers are for those killed in 21st century wars. In addition to Sgt. Stewart, a Desert Storm veteran who was killed in action in Afghanistan, there are markers for six who were killed during the Iraq War, and another for a soldier who had served both in Afghanistan and in Iraq and who died of war-related injuries after returning home.

Twenty-one of the veteran Pentacle grave markers were issued in 2007 and five thus far have been issued this year. As of April 25, 2008, there were none in process, but it is likely that more will be ordered in months to come as Wiccan/Pagan veterans who are in the final stages of life die. Some of these veterans and their next of kin have already been in touch with me about this as part of end-of-life planning.

I am thankful that, at last, the ordering of a grave marker with a Pentacle to honor a deceased Wiccan/Pagan veteran has become as routine a part of the VA's National Cemetery Administration's grave marker application process as ordering a marker with a Christian Cross, Jewish Star of David, or other emblem to honor those of other faiths and beliefs. It is my hope that the VA soon finishes its latest revision of its process to add emblems of belief to its authorized emblem's list in order that emblems of other Pagan paths and other religions can also be included for those in need.

Photos of some of the Pentacle grave markers and their locations, along with articles detailing the history of the Veteran Pentacle Quest and its success are on-line.

VA-issued grave markers with Pentacles are at the Veterans Ridge section of Circle Cemetery at Circle Sanctuary Nature Preserve near Barneveld, Wisconsin. To learn more about how to honor a deceased Wiccan/Pagan veteran at Veterans Ridge with a Pentacle grave marker from the VA, please contact: Circle Cemetery, PO Box 9, Barneveld, WI 53507 USA; (608) 924-2216; circle@circlesanctuary.org.