Tuesday Afternoon at the Parliament

This was a time to cool down and relax - the day started with light rain and 59 degrees. The morning tram was packed with wet commuters and umbrellas. It is a bit scary walking around a busy city like this, with traffic on the left hand side. I'm forever looking the wrong way before stepping off the curb, or crossing the tram tracks. What I figure will happen is that I'll finally get used to this, and have a safe time here, only to get run over when I return by failing to re-adapt to right hand traffic.

Another bit of trivia, I experienced my first Vegimite sandwich. I will be quite okay if I don't experience another.

This morning started with the Earth Spirit musical group, MotherTongue, leading us in a musical celebration. We packed the room, and, as Pagans, moved all the chairs to form a proper amoeba shaped circle. Dierdre led us in a number of rounds, and of course, we were celebrating Spring and the onset of the Summer Solstice. I'll be in for one very rude awakening in a few days.

This was a very energizing session, which was good - early, rain, hectic commute, no coffee - not a good formula for me.

Following this was one entitled "Kanyini". This was the showing of a film of the same name, narrated by Uncle Bob Randall, the Aboriginal Traditional Owner of Uluru. The film takes its name from the Principle of Living in his native language. This consisted of the four aspects that one has to connect with, in order to be whole. He stated it as "My belief system, my spiritual practice, my land, and my family". The film pointed out how the Colonization process of Australia led to a systematic detachment of all four of these aspects.

Uncle Bob then led the discussion after the film. He invited all of us to come see the Aboriginal side of Uluru when we go there - not the sunset side with all the fancy tourist hotels, but the other side where his village is. There are continuing issues in Aboriginal life, and the unfortunated part of it is that policies are being determined by people who don't come out to the community.

The film is available on a DVD at www.kanyini.com which I'll have to go order. There were copies for sale, but they were PAL format, for Region 4, which means they won't play on a North American DVD player (needs NTSC format, region 1).

One thing I learned was that Aboriginal issues were handled in the state of New South Wales by the state Parks system - because they considered Aboriginals to be part of the flora and fauna of Australia.

His suggestion for assistance is to email the Prime Minister of Australia to thank him for the concept of apologizing to the Aboriginals, but that further action is needed, educational reforms are needed, and more self-determination is needed. His second suggestion was to have everyone email Qantas airlines to have them refer to Uluru by it's original name, not by the name Ayer's Rock, which was given by the Colonizers.

Following this, we went to the "Understanding Vodun: A West African Spirituality", run by Robert Houndohome Hounon of Benin, who is the supreme spiritual leader for the council of the Vodun Hwendo tradition. This is one of those traditions that has a great deal of misinformation, fear, and misunderstanding surrounding it. It is closely related to what is referred to as Voodoo in Louisiana, as well as to related traditions in the Caribbean islands. He and his council are working to dispel the fears and misconceptions, and have started publishing manuals about it. Up to now, it has been only an oral tradition. So far, the publications are available only in French. The name Vodun derives from the root words referring to peace and tranquillity, and nature and life. The Ancestors are a key part of worship, as is setting up a circle for practice, and connecting to the elements of fire, air, earth, and water. It is officially recognized as a religion in Benin.

Following the formal program, Angie Buchanan, of the Parliament Board of Directors, gifted Robert 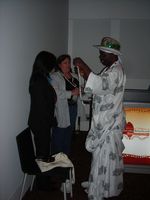 with a shaker that River Higginbotham had arranged to bring to Parliament, and energized at a number of events. This was to symbolize the building of bridges between faiths that revere the land and the ancestors. Robert responded by ritually calling forth the ancestors (we all joined in a chant with him) to bless, and to gift Angie with a beaded necklace that symbolized connection to, and protection of, the Vodun deities.

Now act surprised - Drake was there with Angie's camera, and just at the moment the necklace was given to her, the camera chose to die. Hmmm - oh well, at least there were others of us there with unaffected cameras.

The skies are clearing, it is looking like a nice afternoon here, and it is time to go to another session. I'll post more if the traffic and the trams don't run me over.