The Parliament is not all Sweetness and Light

The third day of the Parliament. Several of the U.S. Pagans spent yesterday with the Melbourne Pagans, for a daylong event called "Magick Happens". This was capped with an evening music concert (Wendy Rule was the headliner) and a Masked Ball.

The Tibetan Monks have quite a presence at the Parliament. They are giving public meditations twice a day with their characteristic throat-singing chants, and are also working on creating a sand mandala for the arrival of the Dalai Lama, which will be on Wednesday the 9th. It is beautiful, and very tediously slow work. Much like a chant that one does with hands rather than voice. 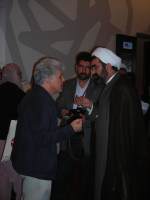 Democracy in Iran", and was presented as an academic paper by one of the advisers to the Iranian president. Essentially he was explaining how the Iranian democracy works, and how it was based strictly on Islamic tenets in the Q'uran, and that representation in the Parliament is allowed for other religions, and that followers of minority religions have their rights. During the question and answer period, a follower of Bahai stood up to ask why, then, were the Iranian Bahais denied their rights, and being repressed generally. The official response was that "Iran views Bahai as a political party, not a religion". Oh, the discussion carried on from there, in louder and more energetic tones.

Even after the session ended, and the room emptied out, the two people involved were still talking quite intensely. The lesson for today is that conflicts happen, but on the positive side, at least they are talking.

I've been sitting in on Islamic sessions for today. A very interesting one was one that dealt with Islamophobia in the media, and how the Islamic community should deal with it. This was geared toward minority Islamic populations in secular nations. This is actually a topic that has a resonance with the Pagan community in the U.S. Suggestions were made that people who deal with the media should have media training, to avoid getting quoted out of context, or making misstatements that some talk-show types would jump on. The key concept is to stay on message, deliver the message, and don't get diverted off message, or go wandering off.

The weather continues to be gorgeous. It was in the upper 70's, so we wandered off for lunch, and caught a tram to the Victoria Market, kind of a massive old barn of a place with space for lots of small vendors selling just about everything. I didn't find a Velvet Elvis there, but I'm sure it's there somewhere. I did, however, get a nice fish and chips, and a bottle of ginger beer, and Sylvia photographed a statue with some amazingly Pagan themes to it. The best we could determine was that it was symbolic of a mother - both the nurturing mother that gets you into this world, as well as the dark mother who takes you out.

Back on the tram to the Parliament, and to the evening Sacred Music plenary session. There was a 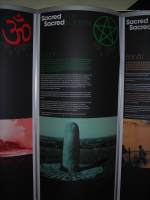 broad variety of performers - something like 20 different performances, with everything from indigenous dancing and didgeridoo music, to a chorus, to Indian flutes, to Sufi whirling prayers, to the chanting Tibetan Monks.

So now it is back on the tram, back to the hotel, and a chance to recharge camera batteries, unload picture files to the computer, and see what sessions we go to tomorrow.