Saturday at the Parliament

Day two of the Parliament. 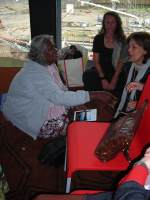 The Parliament continues. It is difficult to convey a sense of the scale of this event. The program book alone is 390 pages, describing every session during the week. At any given time, there are anywhere from 10 to 20 simultaneous sessions. Unfortunately, there is almost always more than one session that I want to catch at a time. The day starts at 8:00 a.m. with a variety of morning spiritual observances from a broad variety of traditions, and ends at 10 p.m. with a plenary session for all attendees. Outside the organized sessions, there are additional activities, ranging from an exhibition hall with a collection of vendors and faith communities talking about their traditions, to a Lion dance, to a sand mandala being created by the Tibetan monks, to art galleries and displays.

Today started with the Solstice Sites and Celebrations program and ritual, which was held outdoors at 8:00 am under a sparkling blue sky, next to the Yarra river, and outside the massive glass walls of the Melbourne Convention Center. Patrick McCollum started the session with a discussion of the combined Northern Hemisphere Winter Solstice and Southern Hemisphere Summer Solstice celebration. This led to how Solstices have been celebrated through the ages, and sacred places where these celebrations have been held historically, and are today. Sylvia carried in and presented the crystal which Selena sent from Circle Sanctuary. This crystal has been energized at each of the past Parliaments, as well as at Circle Community and PSG festivals. The ritual which then followed sent well wishes to Selena Fox, to Circle Sanctuary, and to Margo Adler. The ritual honored the directions and land in the local tradition, which meant that North was connected with Sun and Fire, South with Earth, and that casting was done counterclockwise, which is sun-wise in the south. Participants were given eucalyptus leaves to hold and energize during the ritual, and then allowed to give them back to the community along with well-wishes for other communities and people. Energy was raised with some very powerful chanting and a spiral dance. We were now energized and ready to face the day!

There were two specifically Pagan sessions in the morning. The first one was a panel discussion of 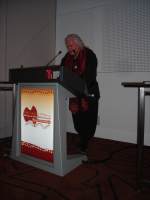 the Divine Feminine, involving Phyllis Curott as the Pagan representative. Following that was a session entitled "Men Who Love the Goddess", which was headed by Drake Spaeth, and had Patrick McCollum, Michael York, River Higginbotham, and Don Lewis as panelists. This led to a discussion that lasted long after the scheduled end to the session.

I attended a session on Aboriginal Art, Community, and Access to Sacred Lands. This session started with a ceremonial smudging of the room and the attendees with the smoke of eucalyptus leaves. This was a requirement of their law, we were told, as a way to introduce the spirit of their tribe anytime they travelled to a new place. The smoke ensures that they are surrounded by, and breathe in, their own spirit.

I was quite relieved to find that the smoke didn't trip off any fire alarm. One note about eucalyptus leaves - Australia has some 800 different species of eucalyptus trees (also called gum trees, according to one wag, because "we can't spell eucalyptus"), so this figures heavily into the landscape and their nature spirituality.

There are considerable issues in Australia about access to Aboriginal rock art. This art is now becoming more and more protected, but in many cases, the locations with the art is protected, while access is still impossible, making it impossible for communities to continue their sacred observances. Further, the rock art constituted an education curriculum. Their whole culture and laws are encoded in their art. From time immemorial, it was prohibited to make that art available to outsiders, since it was held to be so sacred. The tribal elders, however, decided some 20 years ago to transcribe their artwork to canvas, and to share it, primarily to make it available to educate their own people, and secondarily to get their story and their plight out to the world as a whole. The whole concept of their art is amazing to me. It would be as if you were looking at the prehistoric cave art in France with a living guide who could tell you in your own language what every little dot, line, squiggle, and pictograph meant, and what the whole story was about.

In between all the sessions, there are any of a number of informal opportunities to meet and talk with people. I've met with people who know all about Paganism and Wicca, and with some who knew nothing, but at least were curious and willing to learn.

There's more to tell. Tomorrow is another day, and the evening plenary will be the Religious Music concert.