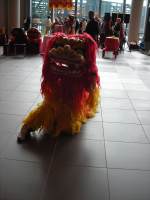 The common response here in Australia is "No worries, mate!" The Pagans have arrived, and this is a very Lion at Lion Dancesmooth running Parliament. Our first contact with the Australian Pagans occurred on Thursday the 3rd, with a hospitality suite hosted by Angie Buchanan and Drake Spaeth, along with Shel Skau, River Higginbotham, Phyllis Curott, and Patrick McCollum. We ended up with some 40 people in a small hotel suite - it was a most powerful and magickal time! The crowning moment had to be when the Earth Spirit Community (their musical group, Mothertongue) gifted us with a song.

After this, we put together some of the remaining details of the Solstice Ritual for Saturday morning, and then went to the Opening Plenary session. The Plenary session had greetings from all the appropriate officials - City, State, and Federal, as well as blessings and well-wishes and performances from about 20 different faith traditions. In keeping with the focus on reconciling with the Aboriginal community, there were such performances as a symphony composed for the event, that included a full orchestra and a digeridoo. The closing was a bell blessing with handbells and digeridoo as well.

Friday the 4th started events off for the serious work of the week. As usual, there were too many

things to do to be able to do everything that I would want. I sat in on a session which was discussing the moral and spiritual imperative for equality of women and girls. This session was motivated by a very articulate letter that former President Jimmy Carter wrote to the Southern Baptist Convention, announcing his departure from their church due to the Baptist's unwillingness to allow the ordination of women.

I next went to a session hosted by Geoff Clark, an Aboriginal man, who had also been a member of the Australian Parliament, and is continuing to be a political activist. His issue was that the Australian policies of reconciling with Aboriginals is not anywhere near complete, and that there are many, many problems. The major issue is that while the Federal government is providing protection for many Aboriginal sacred sites by protecting them in National Parks, they also essentially lock them away from the Aboriginals by preventing them from holding their sacred rituals at their own sacred sites. There is still the continuing issue of destruction of many sites, because they are now being managed - and in that process, some are ending up being "developed".

I had an opportunity to speak with him after the session to let him know that the Pagan community fully understands and sympathizes with the plight that his community is in. I told him that I don't know what the secret is, but whatever he does, he needs to keep fighting to protect the culture of the original nations. Otherwise, he runs the risk of being in the situation that I as a Wiccan am in, of having to rediscover the original roots of my ancestral indigenuous religion. Yes, what the Native people of Australia are facing is no different than having Stonehenge protected as an archeological site, and prohibiting any kind of seasonal ritual being performed there.

The Earth Spirit community hosted an afternoon Peace ritual, which was held outdoors (thankfully). The weather was delightful, and there were easily over 80 participants.

Friday Evening was the Communities night, in which the local Melbourne communities hosted visiting 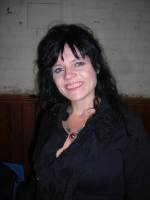 Parliament attendees of their various paths. We were guests of the Melbourne Pagan community, which has a very vibrant and active group of people, from at least three separate traditions that I could determine. Ritual was interesting - you have to get used to the Sun being in the North, and that South represents Earth. The circles are cast in the counterclockwise direction, because that is the way the sun goes through the sky here.

Good music, good dancing and drumming, a good spiral dance, and finally a feast were shared by the 90 plus attendees. Some of the attendees weren't even Pagan, but were choosing to spend the evening with us as a learning experience. I spent quite a bit of time talking with a professor of Theology at a Presbyterian Seminary, and I believe he ended up with quite an understanding by the end of the night.

Half the fun of the community night was in getting there, since it was off-site. In order to get there, we had to travel by tram, switching trams once, between the Melbourne Convention Center and the meeting site for the Pagans. I'm sure it was quite an experience for the rest of the tram riders, since we had our leader call out, "All Pagans off at the next stop!" - we were quite clearly out of the broom closet this evening.

Tomorrow morning, first thing, Patrick McCollum will be facilitating the Solstice ritual at the

Parliament. The crystal that has been energized at Circle will be part of the altar at this ritual, and will be coming back to Circle for the Community Yule festival.

There's more to report, lots more pictures to post as soon as I figure out how to upload them. I'm also getting videos, and hope to share them at Community Yule.

Regards from Down Under,
Dave Linton