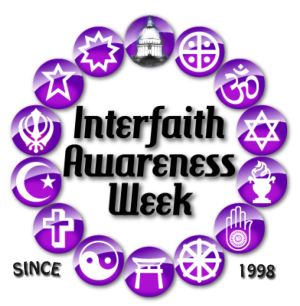 Circle Sanctuary is among the supporters of Wisconsin's Interfaith Awareness Week (IAW), which has been held annually since 1998.

Interfaith Awareness Week takes place each year during the week that includes December 10, Human Rights Day, which commemorates the signing of the United Nations Declaration of Human Rights.

The main event of the week is an Interfaith Awareness Gathering held at Noon in the Rotunda of the Wisconsin State Capitol in Madison, Wisconsin. Over the years, Rev. Selena Fox, Senior Minister of Circle Sanctuary, has been among the speakers, and among the musicians have been other members of the Circle Sanctuary Community.

During the week, an educational exhibit, "The World of Faith Traditions in Wisconsin" is displayed in the Rotunda. It includes displays contributed by a variety of religious traditions and communities. Each year, Circle Sanctuary coordinates the Pagan display, which includes a Yule Log, a Wheel of the Year, a Pentacle, a sign with information about Winter Solstice as a spiritual holiday, and Pagan informational literature contributed by Circle Sanctuary and other Pagan groups.

Each year, Interfaith Awareness Week also includes open houses at houses of worship in the Madison area, interfaith dialog, plus other exhibits and events. 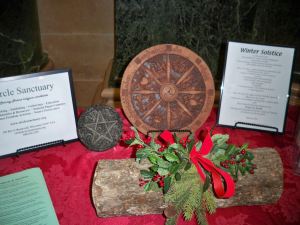