This is just a quick posting. Further details will be reported when we have a chance to digest and 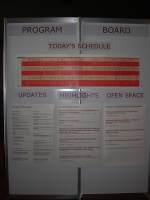 understand it more thoroughly. Sylvia has been sitting in on a number of sessions on Indigenous spirituality, and from what she told me, has fascinating stories to tell. We were both at the Australian Pagans Speak, a panel discussion and forum. Again, Sylvia has better notes than I do. It was a well attended discussion with a lot of follow on talks afterwards. The discussions didn't end until the next speaker arrived in the room for the next session, and even at that, talks continued in the hallway for easily another hour or so. The Pagan presence at the Parliament is both a support to the Australian Pagan community, and is being well noted and understood by non-Pagans.

I should mention that perhaps the most pervasive and least understood influence that any one person or group can have at an event like this is in the individual conversations that occur. It seems that most everybody here is receptive to conversation, and is open to both sharing and learning. At breakfast the other day, my ear was "tickled" by hearing someone speak Swedish. Since I lived there, and knew the language, I struck up a conversation with what turned out to be a Lutheran group and pastor from Skaane, and we shared quite a bit of discussion. At lunch I sat next to a man who was quite active in the Australian Uniting Church - which is an interesting synthesis of Methodist, Congregational, and Presbyterian faiths, along with outreach to the Aboriginal community. Sylvia struck up a conversation with a Quaker at the same meal. Another time we sat and discussed Global Ethics 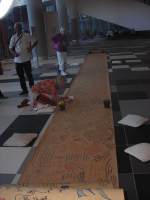 with a woman from Hans Kung's school in Vienna. This morning, while strolling around wearing my "Unorthodox Pagan" t-shirt and black Utilikilt, I attracted media attention, and was interviewed by a videographer from India, who knew virtually nothing about North American neo-Paganism.

We as Pagans are developing a widely known and respected presence at this World Parliament, and we are making it clear that we have common ground for discussions and community with many other traditions.

So I will close out this note for now. The media room makes a nice quiet place for meditation as I finish off a cup of coffee and prepare to go back into the fray. There will be lunch, two afternoon sessions, dinner, and then the evening plenary will be involved with Youth issues.