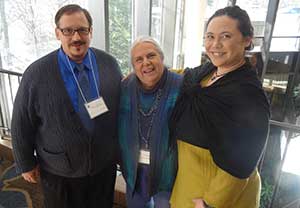 Circle Sanctuary, serving Pagans worldwide since its founding in 1974, has been accepted as a religious endorsing organization member of two important national chaplaincy groups: APC and COMISS Network. With Circle Sanctuary now being part of these groups, its advocacy and support work for Pagan/Nature Spirituality people in hospitals, prisons and in the military has expanded.

On January 4, 2018, Circle Sanctuary received word from the APC, the Association of Professional Chaplains, that it had been approved as a Recognized Faith Group endorser. The APC is the largest national group of 5500 professional chaplains in the USA who are trained to provide chaplaincy care of all persons, respecting their diverse cultures, identities, abilities and beliefs. APC members include Buddhist, Christian, Hindu, Jewish, Muslim and other faiths. And now the APC also includes Circle Sanctuary, the first Nature-centered/Pagan religious organization to receive Faith Group Recognition status in that organization. Circle Sanctuary’s candidate, Rev. Tim ‘Cern’ Staker, already a board certified chaplain, applied for Circle Sanctuary to become his endorser which opened the way for Circle Sanctuary to become recognized as an APC official faith group. Rev. Staker is a hospital chaplain in Indianapolis, Indiana and an ordained Circle Sanctuary minister.

On January 7, 2018, at the COMISS annual conference in Alexandria, Virginia, it was announced that Circle Sanctuary was accepted as a member of the COMISS Network, the national “Coalition On Ministry In Specialized Settings” Network. COMISS is well-known among chaplaincy and pastoral counseling organizations.  Since the 1970’s, COMISS has been the convergence point of Interfaith cooperation on professional chaplaincy’s progress and development.  The network consists of stakeholders of the profession, including denominational and military endorsers and chaplain educators of chaplains in hospitals, healthcare facilities, correctional institutions, mental health facilities, business and industrial settings, pastoral counseling, as well as the Department of Veterans Affairs.

Circle Sanctuary representatives have been attending COMISS for the last five years and applied for membership in Autumn, 2017. Now as a member, Circle Sanctuary adds its voice for Nature-centered/Pagan spirituality among the gathering of endorsers and leaders in the field of chaplaincy, including Christian, Jewish and Humanist organizations.

Circle Sanctuary became a member of another organization, AREB, Association of Religious Endorsing Bodies, in 2017. In January 2018, Rev. Selena Fox and Dr. Dennis Carpenter, representing Circle Sanctuary, attended the AREB national meeting in the Washington, DC area for the first time.   At this meeting, Selena was elected by the group to its steering committee as one of two Member-at-Large positions and she will be involved in planning next year’s meeting.

In addition, Circle Sanctuary also has applied to become a chaplain endorser for the Department of Veterans Affairs as part of preparations for Circle Sanctuary minister Rev. Tiffany Andes applying to be a VA hospital staff chaplain. Rev. Andes is currently in her second year of chaplaincy training as a Chaplain Fellow in a VA hospital in Kentucky.

Congratulations to Circle Sanctuary for these major advances in promoting Paganism and people of Nature-centered paths.  Thanks to all who are supporting our efforts.