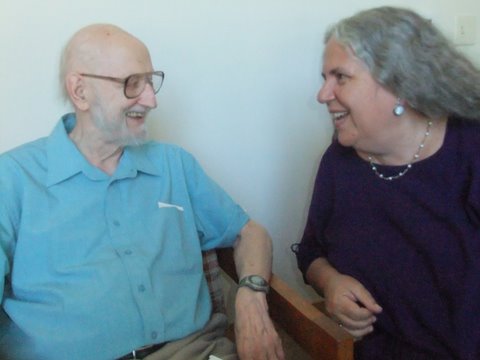 Wednesday, April 18: Christian-Pagan Dialogue: Convergence
George & Selena give an overview of Christian and Pagan religions and their common ground. They also share perspectives on American religious pluralism and Christo-Paganism, a path of spirituality that is a hybrid of both traditions.

Wednesday, April 25: Christian-Pagan Dialogue: Collaboration
Selena & George discuss their experiences with local and global interfaith organizations, conferences, and projects and the contributions that the interfaith movement is making toward world peace, social justice, and environmental protection.

Evening programs are free and open to the public. Each includes presentations followed by discussion.

George Hinger is Catholic, whose past service has included teaching at Holy Cross Seminary in LaCrosse, Wisconsin, serving as Director of the Roncalli Center at the University of Wisconsin-LaCrosse, and serving as the Program Director at Holy Wisdom Monastery in their ecumenical and interfaith ministry. In 1987, George founded the Madison Interfaith Dialogue group and continues to serve as its coordinator. He has been involved in many interfaith endeavors, including the Parliament of the World's Religions.

Selena Fox is Senior Minister of Circle Sanctuary, a Barneveld, Wisconsin based Pagan church which has been serving Nature religion practitioners worldwide since 1974. She has been active in interfaith endeavors for many years, including serving as president of the Greater Madison Interreligious Association, speaking at conferences including the Parliament of the World's Religions, and serving as a religious diversity accommodation advisor in hospitals, prisons, universities, state and federal government agencies, and other institutions.