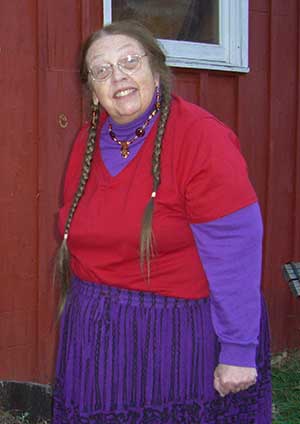 Longtime Circle Sanctuary Community member Robin "Beket" Arnhold of Wisconsin died in Eau Claire, Wisconsin on Tuesday night, January 29, 2019 as a result of complications from a fall.  She was 74 years old.  She was also known as R. R. Arnhold, Robin Ruth Arnhold, and Beket-Asar Edithsdatter.

Beket was born on December 13, 1944 and spent the first part of her life as well as her final years in her hometown of Chippewa Falls, Wisconsin.   She was the daughter of Edith Bonnet Arnhold (1916-2001) and Francis R. “Dick” Arnhold (1904-1959).  Beket graduated from Chippewa Falls High School in 1963.  She continued her education at the University of Wisconsin-Madison where she studied Anthropology and Archaeology and graduated in 1969.  For many years, she lived in Madison, Wisconsin and worked for the Wisconsin Department of Revenue.  After retirement, she returned to living in her family home in Chippewa Falls.

Beket was a Pagan Elder, writer, editor, networker, merchant, astrologer, and Weather Witch.  She was a member of the Circle Sanctuary Community since its founding in 1974 and took part in festivals, classes, Full Moon Circles, and other events.  She wrote articles for Circle publications, including Circle Network News, CIRCLE Magazine, Pagan Spirit Alliance Newsletter, and Pagan Spirit Journal.  Beket was among the founding members of the Pagan Spirit Gathering and over the years, vended and presented workshops.  She was an activist for Pagan civil rights and religious freedom through her work with the Lady Liberty League, which included supporting the successful quest to have the US Department of Veterans Affairs add the Pentacle to its list of emblems that can be included on grave markers it issues for deceased veterans.

In the 1960s, 1970s, and 1980s, Beket was among the Pagans creating community within Science Fiction fandom and the Society for Creative Anachronism.  In the 1970s, she was the Astrologer for Lady Cybele's Cauldron, one of Wisconsin's first public Pagan shops.  In the 1980s, she and Lady Cybele formed the International Weather Workers of the World, and this convergence of weather workers from many traditions met annually for many years at the Pagan Spirit Gathering.

Honoring ancestors was an important part of Beket's spiritual life, and she founded and coordinated Goddess Chapter, an informal network of Pagans with ancestors dating back to the colonial era of America.  Beket also was active in Druid networking.  She was a member of ADF, Ar nDraiocht Fein, and in the 1990s, she led ADF's Sun Raven ProtoGrove and was editor of its newsletter, Notes from Taychopera.  Beket enjoyed crafting magickal jewelry, including beadwork, earrings, pendants, and necklaces.  She vended her creations along with other Pagan goods at festivals, conferences, and Pagan Pride Days in the USA.

We mourn the death of Beket, but cherish the memories of good times together.  We are thankful for Beket’s many contributions to community and the greater Circle of Nature of which we are all part.  Hail and Farewell, Robin Beket Arnhold!

Memorials for Beket are being planned by Circle Sanctuary to be held at Circle Cemetery and at Pagan Spirit Gathering.  To receive details when they become available, email: circle@circlesanctuary.org

Contributions in Beket’s memory are tax deductible in the USA and can be made online:
https://www.circlesanctuary.org/index.php/organization/donating-to-circle
or by sending to:
Circle Sanctuary, PO Box 9, Barneveld, WI 53507 USA.