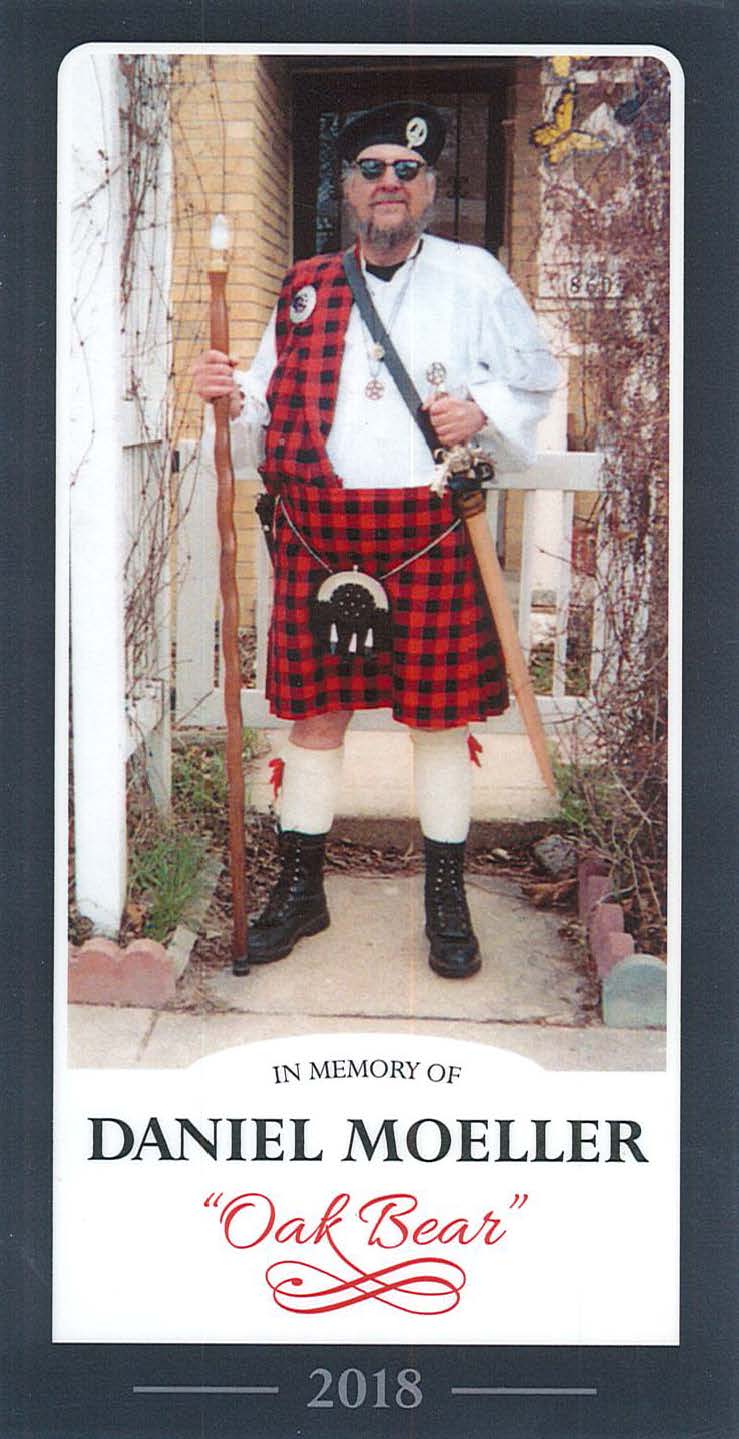 Daniel William Moeller, also known as Oakbear, died on Monday, July 9, 2018 in Tomah, Wisconsin after a long illness.  He was born Daniel William Moeller in Milwaukee, Wisconsin on September 23, 1951.  He was a Pagan US Army veteran who served in Vietnam as a combat medic.  After completing his military service, he went into Nursing as a career, getting an LPN and later a RN.

On August 15, 1992, he married Sandy, also known as Morgan, in Milwaukee.  They lived in Milwaukee for many years, where they were active in Milwaukee area Pagan events including Pub Moots.  Oakbear and Morgan were affiliated with a variety of Pagan organizations, including the Circle Sanctuary Community and the Deeply Rooted Community.  Their 10th anniversary handfasting was held at Circle Sanctuary land and facilitated by Selena Fox & Dennis Carpenter.  Oakbear was a Pagan teacher, Wiccan priest, and Druid.   In 2005, Oakbear and Morgan purchased a home in Nekoosa, Wisconsin and later moved there.

In the final year of his life, Oakbear was hospitalized in the VA Medical Center in Tomah, Wisconsin. Oakbear and Morgan are thankful for the visits, cards, phone calls, and other outpouring of support as Oakbear's life drew to a close.  His wife was by his side as he died.  He is survived by his wife, his stepson Chris, and sister Faith.

On Saturday, October 6, from 1-3pm, Oakbear's Memorial ceremony will be held at Circle Cemetery and will included burial of some of his ashes and dedication of his gravestone, which is one of the first issued by the US Department of Veterans Affairs to be inscribed with an Awen, a Druid symbol.  This Memorial ceremony is open to his family, friends, Circle Sanctuary members, and the public.  Those interested in attending should contact the Circle Office.