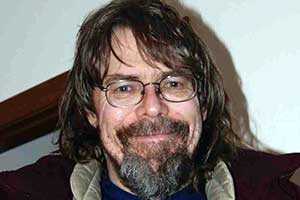 Mark Framstad, also known as Ira, was born on August 10, 1952 in Madison, Wisconsin and died on April 25, 2018 in Madison, Wisconsin.  He was active with the Circle Sanctuary Community during the 1990s, including coordinating first aid volunteers at Pagan Spirit Gathering in 1992 and 1993.  He helped with events and groundskeeping at Circle Sanctuary Nature Preserve.  On June 17, 1995, he married Jacquelyn Archer and they made their home in Mount Horeb, Wisconsin.  Mark's spirituality was multifaceted, including studying, practicing, and teaching Hermetic wisdom, alchemy, and Wicca.

Mark's memorial and ashes burial will be held at Circle Cemetery on Saturday, June 2, 2018, from Noon - 4 pm.  Please RSVP for more details: circle@circlesanctuary.org

by Demetria D. Nanos of Chicago, Illinois, May 2018

I first met Mark Framstad in 1974, at Candlemas, a public festival hosted by the Chicago Temple of the Pagan Way.  It was a madhouse, with over 40 guests (60 or more, maybe?) from a number of different covens and groups.  At Spring Equinox 1974, we actually had a real conversation.  Mark was there with other people from the University of Wisconsin Whitewater.  High Priest Herman Enderle and his then TPW partner, High Priestess Donna Cole, were invited to do presentations as guest speakers at the university on witchcraft, Wicca, and modern Paganism.  They were so interesting that it prompted Mark and the others to come to Chicago for festivals, and led to his growing involvement in the temple’s study of the ancient Mysteries.  Mark commuted to Chicago from Wisconsin for several years.  He eventually moved to Chicago, working as a psychiatric nurse; a job he continued to do when he returned to Wisconsin years later.

The Temple of the Pagan Way in Chicago was very large, and sister groups formed throughout the city and suburbs before and after the Chicago TPW split in 1975 and 1976, with groups remaining in contact and cooperative with each other for the most part. The part of TPW that was centered about the ancient Mysteries became Temple Uranus.  As befits the name, Temple Uranus went through a number of internal changes in a few short months.  Through the cooperative efforts of Herman Enderle and Herman Slater (Magickal Childe Shop, N.Y.C.), it emerged in 1977 as the Chicago Earthstar Lodge, sister lodge to Earthstar in New York. Earthstar was what we had been looking for in our pursuit of the Mysteries.

Mark moved into the Earthstar community in 1978 or ’79.  He chose initiation from the elemental Earth degree to the Air degree, skipping Water and Fire degrees at that time.  Mark rapidlybecame our resident scholar on the Mysteries.  He was a temple officer and assisted or supervised in the setting up of the ritual space, maintenance of shrines, and classes, etc.  Mark introduced the Pythagorean Triads as a different form of ritual work for us.  They were powerful and effective, as well as harmonious with other theurgic and alchemical work we were doing. He introduced us all to an article written by C. J. Bleeker, “Isis as Savior Goddess”, which I still copy and distribute to my students.  While others were still reading the well-written but dated Wallis Budge’s books because they were  copyright-free, Mark was intent on newer informationand updated translations that were apace with current scholarship.

Mark’s sense of humor and love of comedy was great.  He could quote easily from the FiresignTheater’s albums and often had his own funny quips regarding the news of the day.  Always kind and compassionate, Mark extended himself to people when he saw they were in pain or needed help.  He had a tender heart when it came to animals, especially cats – kitties were so loved by Mark!

Mark took the Fire degree in Earthstar Lodge in the early 1980s.  Our dedication as priest or priestess in Fire degree was made to Isis and Osiris, Hera and Zeus, Juno and Jupiter, and others.   Initiate, Temple Officer, Practitioner, Philosopher, Priest, Adept.

Mark moved to Madison, Wisconsin in the late ‘80s, as did several others from our Buddhist and Pagan circles.  He remained in contact with some of us from Earthstar over the years.  In Madison, his focus widened to include involvement with the Circle Sanctuary community, the Masons, and more Alchemical studies.