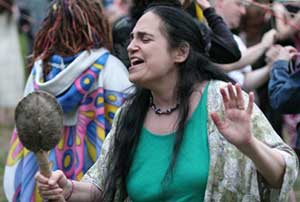 Margot Adler (1946-2014) was an American Pagan elder, Wiccan priestess, National Public Radio news journalist, articulate feminist, passionate environmentalist, progressive social change activist, singer, author, and visionary.  She was beloved by thousands across the United States and around the world.  Margot informed and inspired people of many walks of life, cultures, and philosophies.

For me, Margot also was a longtime spiritual sister and dear friend.  Over the past thirty-six years, we spent time together in each others homes and in other places, including speaking travels to outdoor Pagan festivals, indoor esoteric conferences, Unitarian Universalist services, interfaith gatherings, radio stations, and even a New York City disco.  We connected with each other in a variety of ways -- face-to-face, by phone, by correspondence, and in dreams.  She was a wonderful, brilliant, and dynamic person who loved life and enriched the world.

She was born Margot Susanna Adler on April 16, 1946 in Little Rock, Arkansas and grew up in New York City, New York.  She was the daughter of psychiatrist Kurt Alfred Adler and Jewish agnostic Freya (Nacque) Adler.  Her grandfather was the imminent Viennese psychiatrist Alfred Adler, founder of the school of Individual Psychology and co-founder of Depth Psychology.  Margot's husband and longtime companion was John Lowell Gliedman (1943-2010), a science writer, psychologist, and computer consultant with a Ph.D. in experimental psychology and linguistics. They are survived by their son, Alex Dylan Gliedman-Adler, who was born in 1990.

Margot lived most of her life in her family's home in the Upper West Side of Manhattan in New York.  Over the years, Margot enjoyed spending time walking, watching birds, and communing with Nature in Central Park near her home.  She loved being in and near watery places, and each year vacationed by the sea in Martha's Vineyard in Massachusetts.  I conducted her and John's wedding at Lambert's Cove Inn in Martha's Vineyard on June 19, 1988.  It was a multicultural handfasting rite attended by family, friends, and colleagues.

Margot had a lifelong love of learning.  She attended the City and Country Grammar School in Greenwich Village and then LaGuardia High School of Music and Art in Hamilton Heights. In 1968, she graduated from the University of California at Berkeley with a bachelor's degree in political science.  She received a master's degree from Columbia University Graduate School of Journalism in 1970, and in 1982, did additional education as a Nieman fellow at Harvard University in Cambridge, Massachusetts.

Beginning in her teen years, Margot's worked for a better world. Shortly after beginning her undergraduate studies at Berkeley in 1964, she became active in the emerging Free Speech Movement, and also was involved in the Civil Rights Movement for racial equality.  In the Summer of 1965, Margot went to Mississippi as a Civil Rights worker. In addition, she was a peace activist, feminist, and environmentalist, and wrote about her activist experiences in her 1997 memoir, Heretic's Heart: A Journey through Spirit and Revolution. She also shared social and political perspectives in her most recent book, Vampires Are Us: Understanding Our Love Affair with the Immortal Dark Side, published in March 2014.

Margot's career in radio journalism began in 1968.  She worked for Pacifica Radio and hosted three radio talk shows, "Hour of the Wolf," "Unstuck in Time" and "The Far Side of the Moon."  She began working with National Public Radio (NPR) in 1979 and served in a variety of capacities over the years, including Bureau Chief and National Correspondent.  She was a frequent contributor to "All Things Considered," "Morning Edition," and "Weekend Edition." From 1999-2008, she hosted "Justice Talking," a weekly show held in Philadelphia with a live audience.  She reported on a wide range of topics, including politics, social issues, and the arts, and conducted the first U.S. radio interview with J. K. Rowlings, author of the Harry Potter books.

Her journey in Pagan spirituality began in childhood with her love of Greek mythology.  In the 1970s, she began studying Witchcraft with the New York Coven of Welsh Traditional Witches. In 1976, she became the Wiccan Priestess of Iargalon, a Gardnerian coven. In 1982, Margot changed to primarily practicing as a solitary, but continued to serve the greater Pagan community through writing, singing, teaching, and rituals.

Margot's own Pagan practices and philosophy continued to evolve and deepen through her work with her most renowned book, Drawing Down the Moon.  This well-researched history of contemporary Paganism was first published in 1979, revised in 1986, and most recently revised in 2007.  This book not only has become a classic for Pagans of many paths, it has helped non-Pagans get a better understanding of Paganism. Over the years, it has served as a text in World Religion and Pagan Studies courses at colleges and universities throughout the United States and in other countries.  It is one of the most cited studies of contemporary Paganism in academic and popular literature.

However, Margot's contributions to Paganism go beyond this important book.  She was among the Pagan leaders who helped shape Pagan community. She was among the speakers at multi-tradition Pagan festivals which began emerging in the 1980s, including Circle Sanctuary's Pagan Spirit Gathering.  She shared ideas and stimulated discussion in talks, workshops, and panels in small and large group settings at festivals, conferences, and other gatherings.

She also was active in the quest for equal rights for Pagans in society, and was an advisor to the Lady Liberty League.  She assisted me and Barry Lynn, executive director of Americans United for Separation of Church and State in the dedication of the first Wiccan-Christian memorial marker at Arlington National Cemetery in 2007.

Margot loved singing and had a beautiful voice.  She helped spread Pagan chants and songs in the Pagan world and beyond.  She facilitated chanting in rituals, shared songs around Pagan campfires at festivals, and in recent years, facilitated a ninety-minute singing ritual as part of her presentations at PantheaCon, in San Jose, California.

Early in 2011, Margot learned that she had endometrial cancer.  She began a therapeutic journey that included the best that modern allopathic medicine had to offer as well as complementary approaches of alternative and spiritual healing.  She took part in a series of clinical trials in hopes that participation in this research not only could help her but also others with this disease.  Margot also worked with other healing modalities, such as nutrition, exercising, Nature walks, spiritual healing rites, and creative work.  Margot was symptom free for most of the three and a half years she had cancer.  Before she died, Margot told me that she was thankful for this and thankful to the many who supported her in her quest for wellness.  Margot died of cancer on Monday morning, July 28, 2014.  She passed peacefully at home with her son Alex by her side.

Let us remember and give thanks for Margot, her brilliant mind, her loving heart, her beautiful voice, her activism, her writings, her reporting and other works, her magic, her bright spirit.  May we take comfort in knowing that she lives on in our memories, in the many people, groups and endeavors she blessed.  Hail and Farewell.  Blessed Be.