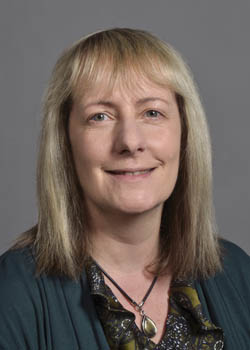 Julie Ann Wichman was born on December 27, 1963 and passed into Eternal Life on August 22, 2012, at the age of 48 years. She was the beloved wife of Joel Scott Herringa for 14 years. They met at Circle Sanctuary's annual Summer Solstice Festival, the Pagan Spirit Gathering (PSG) in 1996, and according to Julie, the happiest time of her life began when she met Joel there. At PSG 2011, they celebrated their 15th anniversary of their meeting.

Click to read Julie's memorial book (.pdf)
Julie was the loving Daughter of the late John and Laura Lee Wichman; Daughter-in-law of Sam and the late Mary Herringa; Sweet sister of John Eric (Vera) Wichman and William (Melinda) Wichman; Sister-in-law of Jeff and Ryan (Katie) Herringa; Awesome aunt of Eric Michael, Sarah, Jonathon, Skyler, Haley, Landon, Rosemary, Libby, Ashley, Corey, Tiffany, Corbin; Niece of James (Roxie) Wichman; Cousin of James (Jessica) Wichman and Michelle (Sean) Wichman.
Family and close friends gathered for her funeral and celebration of her life on Sunday, September 9, 2012 at the Krause Funeral Home in Milwaukee, Wisconsin. It was followed by a potluck picnic at the nearby Greenfield Park. A Milwaukee area Pagan celebration of Julie's life is being planned for Sunday, September 30, 2012.
On Saturday afternoon, October 13, 2012, Julie's memorial marker and cremains will be placed at Circle Cemetery at Circle Sanctuary Nature Preserve near Barneveld, Wisconsin. The cemetery will be open for those taking part in the ceremony at 1pm, with the ceremony beginning at 2 pm. Those taking part are invited to bring at least one flower to leave at the gravesite in memory of Julie.
Memorials in Julie's memory are appreciated. Donations can be made to one or more of these memorial funds: Circle Cemetery; 10th Street Theatre; Aurora VNA Zilber Family Hospice; Milwaukee Area Techinical College Foundation - Julie Wichman Memorial; Peace Action Center; or Rails to Trails Conservancy. 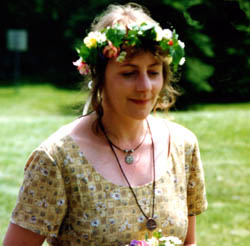 Julie was immensely full of light and love and laughter throughout her life, as attested to by the hundreds and hundreds of friends and family who have paid tribute to her.
She was a creative spirit; as an avid reader, writer, editor and book coach she helped to nurture and broaden our horizons. She worked as publications editor at Milwaukee Area Technical College since 2001. She was the Managing editor of the Shepherd Express newspaper in Milwaukee from 1991 until 2001. She also was Associated Editor of Wisconsin Woman Magazine from 1986 until 1992.
She was deeply spiritual, and her love embraced all faiths and and accepted everyone as they truly are without judgment.
She was a woman of great strength whose social activism improved many lives in her community.
She loved art in all its forms and could play almost any instrument and dance and sing beautifully.
Julie loved the beauty of Nature and was adventurous in exploring new frontiers.
Before she began her journey on the path to the Great Beyond, she left the following words of comfort for those who would grieve her loss: "I can feel your prayers! Always. I feel really good for the first time since May. Happy. Physically fine too. I feel myself getting closer and closer to God every day. As if He is inside all of my cells. Not healing me but better. Purging every bit that is not pure spirit. I feel like every breath I'm able to get is a whole song. It's hard to describe."