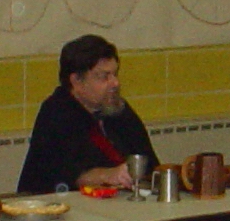 Join family & friends in remembering and celebrating the life of Joel Gainer, also known as David the Thirsty (SCA) & Wolfhawk.

All are welcome to take part in this Green Funeral/Memorial Service and Ceremony of Remembrance conducted by Selena Fox, senior minister of Circle Sanctuary. The ceremony will include the natural burial and scattering of some of Joel's ashes and the dedication of his US Department of Veterans Affairs-issued Pentacle gravestone.

Joel was born in Chicago, Illinois on December 26, 1948 and he died in LaCrosse, Wisconsin on March 25, 2009. In 1977, Joel met Lady Cybele (Carol Olson). They were handfasted in 1978 and married in 1979. In their life together, they were active in the Society for Creative Anachronism and its Dark Horde, in Science Fiction Fandom, and in Circle Sanctuary, including its Pagan Spirit Gathering. From 1967-1969, Joel served on active duty in the US Army and later in life was part of several veterans organizations. He was among the founding members of the Order of the Pentacle, a national Pagan veterans organization sponsored by Circle Sanctuary. Joel was preceded in death by his son David Gainer, his father Walter Gainer, and his mother Ruth Webber Gainer.

Joel was a steadfast man, true to his ideals, loyal and protective of his loved ones, with a love of nature and a sparkle in his eye. The guy could fix just about anything, and had a tool for just about any job, as well. He went by the moniker "Captain Gizmo" at Science Fiction conventions, and relished the opportunity to demonstrate- at length- his latest gadgets. He was irascible, quick witted, fun, and to those that really got to know him, beloved. He will be missed.