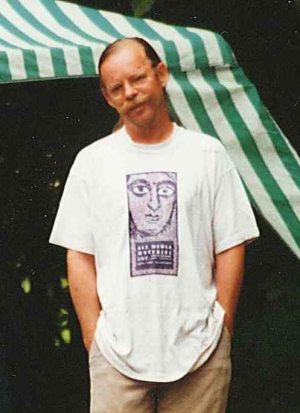 Jeffrey John Koslow was born on August 31, 1947 in Provo, Utah. He was the son of R. Gerald Koslow and Barbara Ellen Gormley Koslow. He graduated from Lincoln High School in California in June, 1965. Jeff served in the US Army from June 13, 1968 to June 11, 1971. He was a sergeant in military intelligence during the Vietnam War and was stationed in South Korea.

Jeff married Mary Bouch on November 12, 1995 and they made their home in Ohio. Jeff was a photographer and a lover of Nature. His spiritual path was a multifaceted blend of Paganism, Buddhism, and Taoism. He was a longtime member of Circle Sanctuary and its Pagan Spirit Gathering (PSG) Community. He served as PSG's official photographer for several years.

Jeff died of cancer on June 18, 2003 at home in northeastern Ohio. On June 24, 2003, family and friends gathered at his and Mary's home for a memorial celebration of Jeff and his life. Jeff also was remembered and honored at a series of memorial rites conducted by Selena Fox during the Pagan Spirit Gathering which was taking place in southeastern Ohio during the week that he died.

On Sunday, June 11, 2006, a container with his cremains were placed atop a rock outcropping at Circle Cemetery at Circle Sanctuary Nature Preserve in Wisconsin in a private ceremony that included Jeff's widow Mary and her sister along with Selena Fox, who conducted the rite. Butterflies, one of Jeff's totems, appeared during his memorial at the cemetery as well as just before the memorial during the meditative walk in the newly created Spiral Labyrinth.

Jeff's ashes were kept in an urn and placed on the rock outcropping rather than being interred at Circle Cemetery during his 2006 memorial because it was not yet an option to order a veteran grave marker with a pentacle on it from the federal government. Despite numerous requests for approval since 1997, the US Department of Veterans Affairs (VA) still had not approved the pentacle for use on the veteran grave markers it issues.

In November, 2006, with the legal assistance of Americans United for Separation of Church and State, Circle Sanctuary filed a religious discrimination lawsuit against the US Department of Veterans Affairs in two federal courts. Litigation uncovered evidence that the reason that the pentacle had not been authorized despite nearly a decade of efforts to get it approved was due to religious discrimination against the Wiccan religion by government officials. Finally, in April 2007, the VA decided to settle litigation and as part of the settlement agreement, it added the pentacle to its list of emblems of belief authorized for inclusion on veteran grave markers. 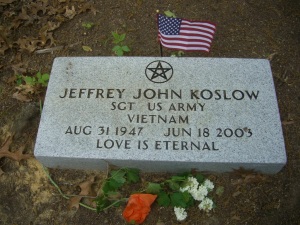 Jeff's veteran pentacle marker was among the first in the nation to be ordered after this veteran pentacle quest victory. It was among the four which arrived at Circle Sanctuary land during May 2007. However, due to the widespread media attention that Circle Sanctuary's litigation and victory had been receiving, it was decided to hold the interment of Jeff's ashes and dedication of his marker at a later time. The other three markers were dedicated at Memorial Day, 2007.

On October 31, 2009 at Circle Cemetery, Jeff's ashes were interred and his veteran pentacle marker dedicated in a community ceremony held as part of the Samhain Festival. Jeff's widow and brother was among those taking part in the ceremony, which was conducted by Selena Fox and others.