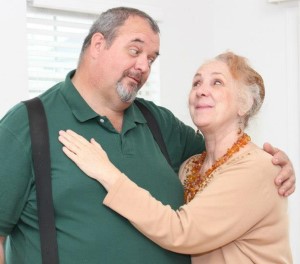 Pagan teacher, musician, and elder Hank Knaepple died on Saturday, August 11, 2018 of complications resulting from a recent medical procedure. Hank was born on July 5, 1961 in Berea, Kentucky.  He and his partner and wife Penny Goody have been friends for forty years.  They married 9 years ago and settled in Evansville, Indiana.

For more than two decades, Hank and Penny have been serving as performance artists and teachers at a variety of Pagan festivals and other events across the USA, including Pagan Spirit Gathering, Sacred Harvest, and Starwood.  Also known as the “Merry Hankster,” Hank was a celebrated community coyote trickster as well as a musician, lighting designer, and drum maker.  Pagan children as well as Pagans of all ages have delighted in his playful spirit, his large bubble making, and other forms of creative entertainment such as shadow puppet shows.  A memorial and other celebrations of Hank’s life and legacy are being planned.