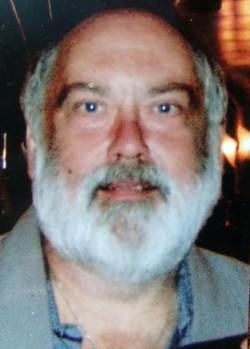 Gordon Pepin, age 60, passed peacefully in his sleep the early morning of February 10, 2012 in Madison, Wisconsin, in the arms of his loving wife, Joy. For the last twenty five years of his life, Gordy identified as a Pagan and was proud to be a hereditary Witch. He was a member of Circle Sanctuary, and for several years was part of the Pagan Spirit Gathering Community. He also attended Avalon festivals for several years with his wife Joy.

Gordy was a steward of the Earth and environmentalist for most of his adult life. He single-handedly fought to stop the filling in of the wetlands near his home on Lake Koshkonong, near Fort Atkinson, Wisconsin for housing development, and was successful. He also was part of the successful effort that included the addition of Pagan ministers to Meriter Hospital's chaplaincy list.

Gordy was part of the Pagan Spirit Gathering when it was in Ohio. He came early for set-up and stayed late for take down, despite needing to walk with crutches from a work injury that he had in 1988. Gordy helped a lot of folks behind the scenes -- getting cars started, volunteering for extra work shifts, helping with some of the stage set-up, and providing transportation to Circle Sanctuary minister Mari Powers. Gordy was an early supporter of Spiral Rhythm, good friends with Beth and Mark Witters and Goddessfather to Kerri Hirsh-Upton, daughter of Beth.

Gordy supported other Pagan artists and leaders, as well. He always went to featured workshops and purchased many CDs, pieces of visual art, handmade jewelry and books directly from the artists and writers he met at the Pagan Spirit Gathering.

Gordy died of stage 4 cancer and congestive heart failure, which were only diagnosed in late January 2012. Gordy is survived by his wife, Joy Hartje-Pepin. Gordy will be among those remembered and honored in the Circle of Remembrance at the start of the Pagan Spirit Gathering on June 17, 2012. On Saturday, July 14 at 1 pm, Gordy's cremains will be interred at Circle Cemetery.

Blessed journey in the Summerland, Gordy -- you are remembered and missed.