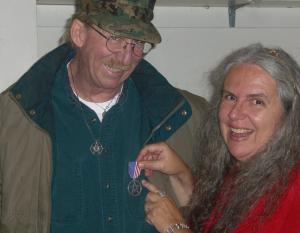 Eric was born on November 27, 1956 in Madison, Wisconsin, and is survived by his wife Bronwyn (Bonnie) and their daughter Bryn. He also is survived by two sons and a daughter from a previous marriage, and by brothers, sisters, his father, and numerous other family members. His mother, Pat Donohue, was also a member of Circle Sanctuary and her cremains are buried at Circle Cemetery.

Eric, a Pagan Marine veteran, was one of the founding members of the Order of the Pentacle. He also assisted with the Veteran Pentacle Quest. His iron sculpture, honoring Pagan military dead, is at Veterans' Ridge of Circle Cemetery.

Eric and his life were honored in a public memorial on March 6 in Spring Green, Wisconsin and will be again honored in July 2009 at a private rite for family and friends at Circle Cemetery near Barneveld, Wisconsin.

Click here to view memories and condolences submitted by others. 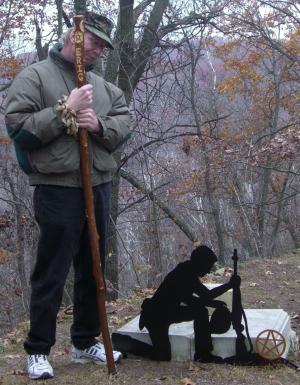 Eric Rudolph Erickson, our beloved and amazing husband, father, brother and friend, passed away at home on Friday, Feb. 27, 2009, after a long and courageous battle with cancer at the age of 52. He was born on Nov. 27, 1956, in Madison to Rudolph and Patricia (Hunter) Erickson. He graduated from Mount Horeb High School in 1974 after which he joined the U.S. Marine Corps where he served our country honorably for six years. A loving and devoted husband and father of four, Eric was most commonly admired for his compassion for others and his sense of humor which was with him until the end. He is survived by his wife, Bronwyn "Bonnie" Erickson of Spring Green; his stepfather, Neil Donohue of Zephyrhills, Fla.; his sons, Eric Erickson Jr. and Lucas (Sarah) Erickson; his daughters, Amanda (Bill Van Cuyk) Erickson and Bryn Erickson; 6 and 1/2 grandchildren; siblings, Donald (Debi) Donohue, Mark (Mary) Erickson, Liz (Ben) Oldenburg, Karin (Larry) Austin, Cheryal (Kevin) Boles, Greg (Marian) Erickson, Ted (Leslie) Erickson, Dan (Karla) Donohue and Kathy (Mike) McWilliams; 17 nieces and nephews; and many aunts, uncles and cousins.