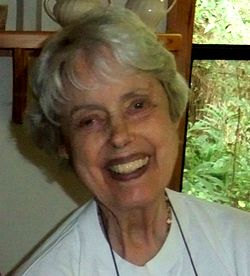 Deborah Ann Light died in the early hours of Tuesday, July 21, 2015.  She was a Hedgewitch, feminist, environmentalist, philanthropist, and Pagan elder active in national and interfaith work.

Deborah was born on June 5, 1935 in London, England to American parents.  She was raised in Nashville, Tennessee, and later made her home on the East End of Long Island, New York.  During the last part of her life, she lived in Gainesville, Florida and spent time at Crones Cradle Conserve, a feminist Nature preserve and organic farm she helped found with her beloved spouse and partner Jeri Baldwin in the 1980s in nearby Citra, Florida.

A series of memorials are being held to remember, honor, and celebrate Deborah and her life.

A public memorial for Deborah will be held at 4 pm on Saturday, September 19, 2015 at Quail Hill Farm, Amagansett, Long Island, New York.  Rev. Selena Fox of Circle Sanctuary will conduct the ceremony written by Deborah. The ceremony will be followed by a reception.

A memorial for Deborah will also be held at Circle Sanctuary Nature Preserve near Barneveld, Wisconsin as part of the Samhain Festival, October 30-November 1, 2015.  Selena Fox will conduct the ceremony at Circle Cemetery which will include interment of some of Deborah's cremains and dedication of a memorial stone.

Remembrance in The Wild Hunt

In 1985, Deborah received a Master's in Religious Studies from Norwich University in Vermont.  Her thesis was one of the first in the emerging field of Pagan Studies to examine contemporary Goddess Spirituality in the United States.

Deborah supported a variety of feminist, environmental, Pagan and other organizations, projects and endeavors over the years.  She was founder and executive director of the Thanks Be to Grandmother Winifred Foundation, which for nine years funded projects by older women that benefited women.

Deborah was a longtime member and benefactor of Circle Sanctuary, its Nature Preserve, its cemetery, and other work.  She was part of the Pagan Spirit Gathering in its developing years and was among the founding supporters of the Lady Liberty League, which works for Pagan civil rights and religious freedom in the United States and internationally.

Deborah also supported a variety of other Pagan organizations and endeavors, including Covenant of the Goddess, Earth Spirit Community, Reclaiming, Ardantane, and others. 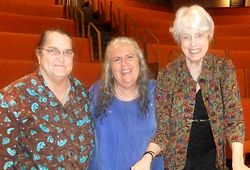 Deborah is beloved and missed by many across the nation and around the world.  She is survived by her partner Jeri and by her son, Michael, from her first marriage.

Along with others in the Circle Sanctuary Community, I am thankful for her friendship, wisdom, intelligence, grace, strength, and dedication to helping others.  May we take comfort in knowing that she lives on in the lives and endeavors of many individuals and groups that she inspired and supported.

Deborah, we remember you, we honor you, we celebrate you.