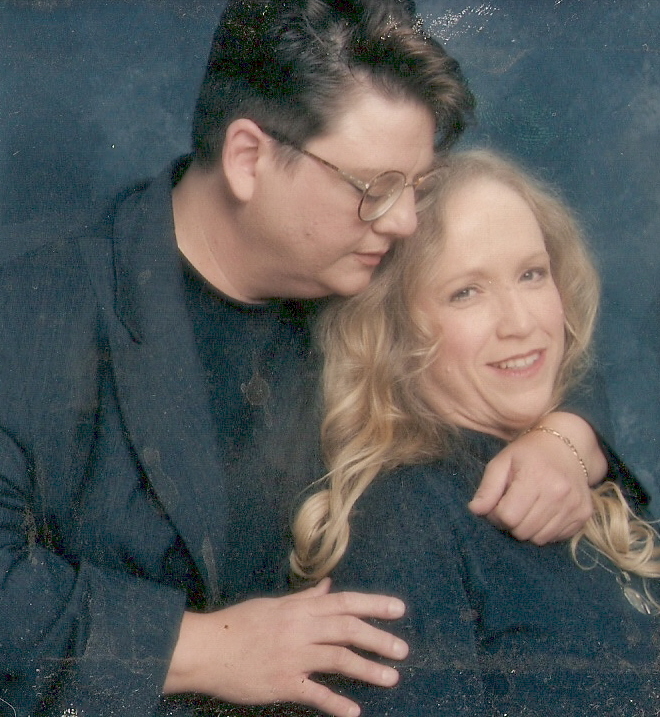 An Interfaith memorial service will be held on Saurday, May 12, 2012 at 11 am at the Church of the Incarnation (Episcopal) in Santa Rosa, California. RSVP: lea@leapierce.com

A Pagan memorial service that will include cremains interment will be held at Circle Cemetery at Circle Sanctuary Nature Preserve near Barneveld, Wisconsin on Saturday, July 21, 2012. RSVP: circle@circlesanctuary.org

De-Anna was born on March 31, 1952 and was the adopted daughter of Robert White and Dorothy Plock White of Wisconsin. She lived the first part of her life at a variety of urban, suburban, and rural places in Wisconsin. She moved to Santa Rosa, California in 1999 and became life partners with Lea Pierce.

During her years in California, De-Anna did writing, including a column for SageWoman magazine and a book on Candle Magic, which will be published posthumously later this year. She also branched out into various business endeavors. She was part owner and Secretary/Vice President of Indian Ridge Real Estate, a property and management company owned by her partner Lea Pierce. She and Lea also founded Wine Competition Management LLC in 2007, which in four short years became the wine industry's leading production company for competitions, launching The National Women's Wine Competition, the Organic & Biodynamic Wine Competition, the U.S. Professional Wine Buyers Competition, and the NextGen Wine Competition for Millennial Wine Drinkers.

Wine Competition Management redefined the wine competition niche and received world-wide publicity including Decanter Magazine and The Wall Street Journal. De-Anna's encyclopedic knowledge of wine and her superb administrative skills paired dynamically with her partner's marketing skills to produce an acknowledged phenomenon in the international wine world. De-Anna worked with such luminaries as Gina Gallo, former Ambassador Kathryn Hall, Margaret Mondavi, and Eileen Crane of Domaine Carneros, the American arm of Tattingers and many other leading women winemakers and marketers.

De-Anna began her studies of Goddess Spirituality, Wicca and Paganism in college. In her mid-twenties, she and then partner Lugh Shin McGhee led the First Wiccan Temple of our Lady in Milwaukee. In 1978, they began studying Circle Craft with Selena Fox and Jim Alan, and the following year, joined their household and began living with them at Circle Farm, a rented farmhouse near Sun Prairie, Wisconsin which served as Circle Sanctuary's first headquarters. De-Anna continued to be part of their household at subsequent rural locations in Ashton and Black Earth.

De-Anna was Circle Sanctuary's first church secretary and one of its first ordained priestesses. She took the name De-Anna Alba at the time of her ordination in 1979 and registered it as her ministerial name in 1980.

De-Anna had a beautiful voice and was among those singing with Jim Alan and Selena Fox on their 1980 album "Songs of Pagan Folk," one of the first albums of contemporary Pagan music. De-Anna sometimes accompanied Selena and Jim on their speaking and singing travels around the USA. She performed with them at the 1979 Pan Pagan Festival in Indiana and the 1980 Witches Ball in New York City.

In addition, De-Anna was part of Circle Sanctuary's early years in doing public education about the Wiccan religion and contemporary Paganism. She appeared with Selena and Jim in local and national media, including national television (interviewed by Phil Donahue on NBC's Today Show) and press (Time, People, Milwaukee Sentinel). She assisted Selena with interfaith endeavors, including being part of a meeting with the Dalai Lama during his first trip to the USA in Fall, 1979.

De-Anna's spiritual journey was multi-faceted and encompassed the study and practice of a variety of traditions, including Wiccan and Pagan spirituality and Celtic and Anglican Christianity. Connecting with the Divine Feminine was the focus of De-Anna's spiritual life. She was strongly connected with Mary, especially during the last part of her life's journey. De-Anna's matron Goddess was Cerridwen and her principal ceremonial tool was the Cauldron.

De-Anna engaged in solitary Wiccan practice and also was active in several spiritual organizations during her lifetime. In addition to the First Wiccan Temple of Our Lady and Circle Sanctuary, De-Anna was a founding member of EarthSisters, later renamed MoonSisters, a women's spirituality group within the Circle Sanctuary Community in the early 1980's. She also was active in the Pagan Spirit Alliance. In the mid-1980's, she studied Gardnerian Wicca and became a third degree priestess. She was a co-founder and co-facilitator of Earth Conclave of Madison, Wisconsin. Later, she became a priestess in the Dianic tradition and was part of Reformed Congregation of the Goddess. Later, De-Anna formed her own initiatory tradition. De-Anna attended a variety of Pagan festivals and Goddess conferences during her years in Wisconsin.

De-Anna's Goddess spirituality writing career began with her contributions to CIRCLE Magazine, originally known as Circle Network News. She was an editor of Circle News and among the contributors to the first Circle Guide to Pagan Resources (1979) and the Pagan Spirit Journal (1982). Later, her writings appeared in periodicals of other organizations. For the past 22 years, De-Anna was a regular columnist for the Women's spirituality journal SageWoman. In addition to published articles, De-Anna was author of the book, Cauldron of Change: Myths, Mysteries and Magick of the Goddess (1993). De-Anna continued sharing perspectives even as she neared the end of her life. An interview with De-Anna conducted by Lea will be published in the March 2012 issue of SageWoman.

One sample of her work in Circle Network News: Summer Invocation to the Goddess

May those of us who mourn her passing take comfort in knowing that De-Anna lives on in her works, in our memories, and in the many lives she blessed during her lifetime. She enriched this world with her writings, her voice, her rituals, her wisdom, and her spirit.

De-Anna: We Remember You, We Honor You, and We Celebrate You, Your Life, and Your Legacy!

Obituary compiled by Selena Fox with contributions by Lea Pierce and others.