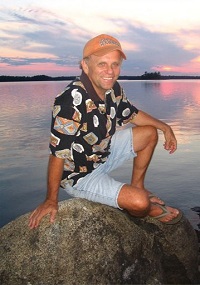 Dave Erickson of Spring Green, Wisconsin was an award winning documentary filmmaker, journalist, musician, and environmentalist. He was born on April 28, 1953 in Racine, Wisconsin and died on August 24, 2020 in Minneapolis, Minnesota.

Dave loved Nature and was a multi-faceted environmental activist and educator. Through his company, Ootek Productions, Dave created dozens of documentaries, including award winning films shown on Wisconsin Public Television. Among his films were those about the Lower Wisconsin Riverway, "Gather Like the Waters" and "Rhythms of the River."

Dave enjoyed watching and filming birds and other wildlife. He also was involved in wildlife education and appreciation. He created an early version of Eagle Watching Days at Wollersheim Winery and helped form the Ferry Bluff Eagle Council (FBEC). He also helped create and sustain Friends of the Lower Wisconsin (FLOW). He was associated with Circle Sanctuary near Barneveld, Wisconsin and the Free Congregatio of Sauk County in Sauk City, Wisconsin.

Dave was an advicate of Greening the end of life. Prior to his death, he made arrangements for a full body natural burial at Wisconsin's first Green Cemetery. On August 30, 2020, his wishes were fulfilled. His shrouded body was returned to the Earth at Circle Cemetery in a ceremony facilitated by longtime friend and colleague Rev. Selena Fox. Family, friends, and several Circle Sanctuary ministers assisted with the rite. On the morning of Dave's burial, a Bald Eagle was observed circling over the Green Cemetery of Circle Sanctuary Nature Preserve. We are thankful for Dave, his life, and all his good works. Green Blessings. 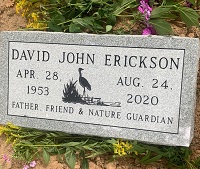