Circle Sanctuary at the 2021 Parliament of the World's Religions 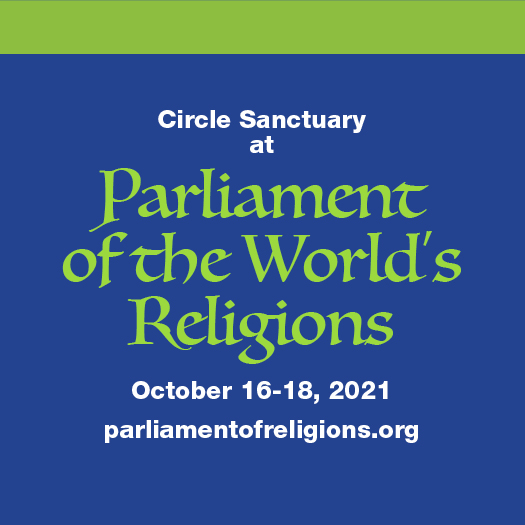 The Parliament of the World’s Religions is one of the oldest and largest international interfaith gatherings on Planet Earth.  The first Parliament was held in Chicago, Illinois, USA in 1893, and it ushered in a new era of interfaith communication and understanding.

Circle Sanctuary has been part of the Parliament of the World’s Religions since its centennial rebirth in 1993.  Circle Sanctuary ministers, members, and associates have been among the speakers, exhibitors, and networkers.

In 2021, the Parliament of the World’s Religions will be held for the first time as an online event.  It will take place October 16-18 and will include plenaries, ceremonies, panels, workshops, and exhibits.  Those who register will also be able to view recordings of many of the sessions for several weeks after the Parliament convenes.

Festivals of the Dead: Dia de Muertos and Samhain
Sunday, October 17, 1-1:45 pm central (live)
Rev. Selena Fox and Rev. Laura Gonzalez will discuss similarities and differences in lore, imagery, rites, and customs for honoring the Dead in Celtic traditions of Samhain and Mexican traditions of Dia de Muertos/Day of the Dead.

A 21st-Century Morality: The Rise of Ecocentrism, Climate Feminism, and a Global Alliance of the Rights of Nature
Sunday, October 17, 6-6:45 pm central (watch video here)
Rev. Charlotte Bear will talk about the rise in climate feminism and activism, the shift from ego-centric worldview to an eco-centric one, and mobilization of Planet Earth defenders fighting for the Rights of Nature.

Pagans and Heathens: Where on Earth are We? An International Perspective
Sunday, October 17, 10-10:45 pm central (watch video here)
Rev. Selena Fox and Rev. Laura Gonzalez will be speaking on this international multi-tradition panel that also includes moderator Morgana Sythove of The Netherlands and Arild Aston-Eikrem of Norway.

The Healing of the World
Monday, October 18, 2:45-3:30 pm (pre-recorded)
Rev. Georgette Paxton is among the Pagan priestesses of several traditions contributing to this Global Healing ceremony, along with facilitator Angie Buchanan, Beryl Ouimette, Katie LaFond, and Patricia Ballentine.

Climate Crisis at forefront of agenda for Parliament of the World's Religions, Religion News Service, October 19, 2021