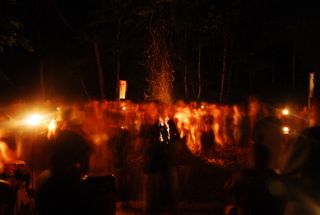 Sacred Fires and Sacred Flames have been an integral part of the Pagan Spirit Gathering since it began in 1980.  The Pagan Spirit Gathering, also known as PSG, is one of America’s oldest and largest celebrations of Summer Solstice and Nature Spirituality.  The Fires of PSG symbolize Sun, Summer, Community, Culture, and Celebration.  They are sources of illumination and inspiration that are an integral part of celebrating Summer Solstice and creating Community.

A variety of traditions involving sacred work with Fire have developed over the years at PSG.  Some of these traditions are forms of ancient Pagan practices, while others are more recent in origin.

A Community Summer Solstice Fire has been part of each PSG since it began in 1980.  Called the Sacred Fire, it represents the Spirit of the PSG Community and its celebration of the Sun at Summer Solstice time.  As was done by Celtic, Germanic, Scandinavian, Baltic, Roman, Greek, and other old European Pagan peoples, we use Oak wood as a fuel for our Sacred Fire.  Before the Sacred Fire is lit, we add ashes and charred wood from the previous year’s Community Sacred Fire.  This kindling a new fire from remnants of a previous one is an ancient Pagan practice representing continuity with the past in the on-going spiral journey of life.

In creating each year’s Sacred Fire, we also include dried stalks of Mugwort (Artemisia vulgaris), a ritual herb long associated with Summer Solstice celebrations.  The Mugwort we use is from the Mugwort Circle, a tall hedge and ritual circle around our Maypole at Circle Sanctuary Nature Preserve in Wisconsin.  We harvest the Mugwort in a special ceremony at Lughnassad time during our Green Spirit Festival in early August.

On the evening of the opening day of the Pagan Spirit Gathering, we light the PSG Community’s Sacred Fire during our Opening Ritual.  The Fire is located in the center of our main Community ritual circle area.

Each year, one of the elders in our Community serves as the PSG Firekeeper.  The Firekeeper, assisted by a small crew of other Community members, ritually kindles the Fire as the rest of the Community chants and our Community drummers make rhythms.  After the Sacred Fire ignites and grows in intensity, my husband, Dennis, and I walk clockwise around the Fire and carry a large wreath of evergreen boughs used to celebrate Yule six months before at our Winter Solstice celebrations in Wisconsin.  We cast this wreath into the Fire to signify the turning of the Wheel of the Year.  As the wreath blazes and burns, gathering participants cheer and welcome in the Summer.

Then, PSG coordinators of various aspects of gathering Community life come into the center of the ritual circle and encircle the Sacred Fire.  As they cast in handfuls of dried sacred herbs, they speak blessings upon the gathering and the Community.

Throughout the entire week of the gathering and through all types of weather conditions, the PSG Firekeeper and crew, assisted by other Community members, continue to watch over the Sacred Fire to make sure that it continues to burn day and night.  In instances of heavy rains, the Firekeeper and crew usually place a portable free standing canopy over the Fire or use other methods to protect the Fire and keep it burning.

A variety of individual, small group, and large community rituals, meetings, workshops, meditations, and other activities take place around the Community Sacred Fire during the gathering.  Community members often feed the Fire dried flowers, sweet smelling herbs, paper talismans, and other spiritual offerings.  No trash is burned in the Sacred Fire.  The Sacred Fire is respected as a spiritual presence embodying the Community Spirit as well as a sacred area.

Each day’s morning meeting is held in the ritual circle around the Sacred Fire.  Community members gather to share news, announcements, discussion, music, drumming, and meditation.

In late morning of the final day of our week-long gathering, the Community Sacred Fire is thanked, honored, bid farewell, and then extinguished as part of the Closing Ritual.  Following this ritual, after the remains of the Sacred Fire have cooled, the PSG Firekeeper collects some ashes and chunks of charred wood for use in starting next year’s Sacred Fire.

Other PSG Community members have the option of taking bits of the Sacred Fire’s remains home with them to bless their home fires and remind them of their connection with the Pagan Spirit Gathering Community and the larger global Pagan culture of which we all are part. 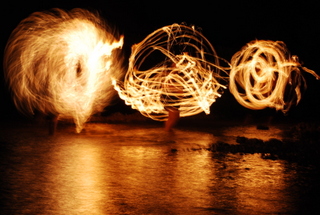 Another ancient Solstice Fire practice which has been part of each PSG over the years is that of celebratory dancing and drumming around blazing bonfires.  In addition to happening as part of rituals around the Community Sacred Fire in the main ritual circle, this also occurs at other places within the gathering site.

The Community Bonfire Circle space has been developed in a wooded area of the gathering site as a place dedicated to drumming and dancing.  The Bonfire is initially kindled from the Community Sacred Fire following the conclusion of the Opening Ritual in the main ritual circle. One of the major PSG rituals, the Tribal Dance and Drum Ritual is held there on the second night of the gathering.

During the daytime, a variety of drumming workshops are held at the Bonfire Circle.  Each evening, ecstatic dancing and drumming happens throughout the night.  Drummers and dancers interact with each other and the Bonfire in the center of the circle.  Various drummers and dancers take turns establishing rhythms, which vary in pace, style, and intensity.

In addition to rhythm making with drums, often there are the additional sounds of tambourines, rattles, zills, flutes, bells, and other instruments.  Sometimes there also is chant-singing.  A variety of dancing styles may occur during an evening, such as trance dancing, ribbon dancing, and circle dancing.  As with the Community Sacred Fire, herbs, wood, and other spiritual materials may be added to the Bonfire as part of dancing and drumming experiences.

Next to the Bonfire Circle is the Fire-Spinning Area.  Fire-Spinning instruction and performances take place there.  By special arrangement, some Fire-Spinning also is incorporated in large Community rituals and other events.

Another special area of deep spiritual practice is the Sweatlodge.  This sacred place is an area where sacred sweat traditions of the Americas and, occasionally, old Europe are practiced.

The Sweatlodge has its own Sacred Fire.  This Fire is used to warm the stones that provide the transforming sacred heat during Sweatlodge rites.  The PSG Community Sweatlodge coordinator, trained in traditional ways by a Native American elder, watches over the PSG Sweatlodge area and activities, to make certain that spiritual and safety protocols are abided by.  The Sweatlodge Coordinator also interfaces with the elders and teachers of different sacred sweat traditions who conduct Sweatlodge rites.

Other ritual fires sometimes are kindled in workshop areas and gathering centers as part of various small and large rituals, such as child blessings, handfastings, coming of age ceremonies, other life passages rites, guided journeys, and consecration rites.  Also, each year, at least one potter facilitates a clay sculpture workshop in which participants create sacred images, ritual bowls, pentacles, and other altar pieces.  After the clay pieces have dried, they are pit fired in a ceremonial Fire created for that purpose.

The campfire in Amethyst Circle, the alcohol free camping area for Pagans in recovery, serves as a focal point for meetings and socials as well as ceremonies there.  There are social campfires in other encampments such as the Rainbow Center and Camp, for GLBTQ Pagans, and the Guardians Camp which coordinates First Aid and Safety.

One of the oldest and most spectacular of the Solstice Fire traditions at each year’s PSG is the candlelight procession to the Opening Ritual.  As twilight approaches, PSG community members dress for ritual and each lights a candle in a lantern or jar to carry with them.  With these lights, they join the community procession as it weaves its way through camp toward the main ritual circle.  Like a great ribbon of flickering flames, the procession spirals around and around within the great circle.

Hundreds of lights gleam and glimmer in the darkness.  Our lights represent both our individuality as well as our unity.  Our procession with these sacred flames spiritually connects us with each other, with the Spirit of the PSG Community through its history, and with the many others who have used sacred processions with flames through the ages as part of their religious and cultural practices.

A long-time favorite PSG Solstice Fires tradition occurs at the end of the opening ritual, when each participant simultaneously lights a sparkler from her or his candle flame.  Participants then wave their glowing sparkler wands overhead as they make wishes and blessings for the gathering. 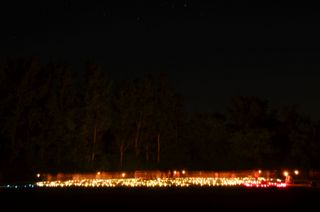 Another way we celebrate Summer Solstice at each year’s Pagan Spirit Gathering is with a Candlelight Labyrinth Ritual.  One thousand votive candles, each set in sand in translucent cups, are arranged in an ancient labyrinth pattern within the main ritual circle.

Known as the Seven Circuit Labyrinth, the pattern we use is more than 5000 years old and dates back to Pagan Crete.  At twilight, the Candle Labyrinth Ritual facilitators and helpers light each of the candles and do a special blessing of the Labyrinth.

Over the course of the night, from dusk to dawn, hundreds of PSG community members silently and meditatively enter and walk the Candlelight Labyrinth as a ritual of spiritual transformation.  After walking the Labyrinth to its center, which is next to the Sacred Fire, most pause and meditate for a time before walking the Labyrinth back to its gateway.  Experiences with the Labyrinth vary.  For some, it is calming, while for others it is energizing.  For most, it is a renewal ritual that deepens spiritual understanding.

As twilight approaches each day of PSG, flames are kindled to illuminate roadways, centers, and campsites throughout the gathering site.  The PSG Community Torchlighting coordinator and crew make their way along main roads and side paths and light the many tiki torches that they have filled with kerosene, citronella oil, or other fuels earlier in the day.  They also light torches at the community altar, stage, and centers.

Throughout the years, there has been a growing number of tiki torches appearing at individual campsites as well, and these are lit by campsite members as part of their welcoming the night ritual process.

In addition, or as alternatives, to tiki torches, some individuals and groups kindle votive candles, oil lamps, and candle lanterns to illuminate their campsites, and in recent years, some solar-powered torches also have been used by some participants.  Many Community members have sacred flames on campsite altars and shrines.  Merchants who keep evening hours often light their booths as well as their campsites with flamelights.  Most campsites with Fire rings also have campfires.  In addition to their use for cooking food and warming beverages, these campsite fires serve as focal points for small group evening activities, including discussions, storytelling, singing, and merry-making.  Some of these campfires also are used for household or small group private rituals.

The widespread use of many types of Fire, including torches, lamps, candles, and campfires throughout the gathering site each evening creates an enchanting ambiance which is timeless, bringing forth ancestral memories of living in community during times when live flames were the customary means of night time illumination.  The flickering of flames and the various Sacred Fires in rituals, in community areas, along paths, and throughout the gathering tribal village is a visible reminder of our connection with each other, with ancient ways, and the Summer Solstice.