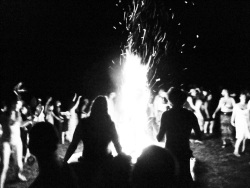 “Eight hundred hands, reaching up. Four hundred people, focused on one illuminated orb. One tall, slim man moving among us in the twilight, carrying the representation of Gaia, our Mother Earth.”

Kathy Nance of St. Louis Today wrote those words about the main ritual of Pagan Spirit Gathering (PSG) 2010, reflecting what an immensely powerful experience it was.  What the article didn’t tell you was that I was that ‘tall, slim man’ that was lumbering along with the representation of the planet Earth.

I am not sure many people have a good understanding of what goes into organizing a ritual for hundreds of people to participate in.  Those who do also know what a haphazard process it can be to get a great idea for a ritual, than to quickly pull it together with people you may have never worked with before, and than count on them not to make a major blunder.  My Pagan Spirit Gathering memory is about my experience of the quirky process that led to a humbling and profound ritual experience.

The 2010 PSG ritual was conceived by Shauna Aura Precourt, with input from Selena Fox and Nora Cedarwind Young, and a lot of on site help by Shauna’s partner, Mark Mandrake.  The intention was not just to do a ritual for some sort of nebulous inner work or warm, fuzzy, community togetherness; rather they wanted to spiral deep into each ritual participant and draw out the power to create real change.  Than spiral out into the world where time outside PSG would be more than just a ‘supply run’, rather it would be a chance to bring the PSG spirit in their lives, make real healing change for themselves and rekindle their devotion to the most visible symbol of the Divine: the Earth.

I came into this process when Shauna sidled up to me one day at PSG. Since I was presenting workshops on vaguely environmental topics, she asked me if I would like a part in the ritual.  I’ve known Shauna for a while now.  We met at a Circle Sanctuary festival and spent the better part of the day talking about community dynamics, modern Paganism, and where we are all headed.  After that we kept in touch on Facebook, had a couple phone conversations, and exchanged some emails.  At PSG 2009 I’d been drawn into a very strange, late night, conversation with Shauna about how cool her hanging, solar powered, pear shaped, light string looked on her golf cart.  By any Pagan’s reckoning we were best buddies, or fellow fifth circle adepts of the blue council, so how could I say “no?”

From there, I plunged into one of the craziest ritual planning sequences that I have ever taken part in.  Shauna wanted me to participate in the ritual by helping people fall in love with the world again.  She described the role as calling out the moments where people understood the majesty of the Earth, things like ‘the first time I saw the Earth from space.’  This ritual role kicked off a crazy snow ball effect that rapidly increased my level of participation in the ritual.  At the first planning meeting Shauna thought it would be logical that I also help with calling the element of Earth.  At the next planning meeting I was drawn into helping with the Trance Journey portion of the ritual, where the ritual facilitators would be calling out questions in an overlapping fashion to draw the ritual participants into an altered state of consciousness.

With the snowball still rolling at three ritual parts, shortly after that I was asked if I could carry the world on my shoulders.  In a brilliant move, Shauna and Mark explained to me that they wanted a grand symbol of the Earth to be present at the ritual, so they had purchased a four foot wide, plastic, inflatable globe.  To use the globe for the ritual that night, Mark and I had to stand around in awkward and possibly compromising positions with a bike pump ‘blowing up the Earth’ for twenty minutes before we stowed it till the ritual in the evening.

With the idea that I was going to have to retrieve the giant globe during the ritual, I was standing squarely at four different parts in the ritual and desperately hoping I could keep them all in my head and their order straight.  Nobody wants to be the person who messes up the grand ritual. This made a large portion of the rest of the day as ritual preparation for me, as I continued to go through the different parts in my mind.

The evening of the ritual, I was hastily chatting with other facilitators to make sure I remembered my parts, while the drums of the ritual procession pounded off in the distance.  Later, I was equally hastily involved in making sure community elders put their chairs in good spots as the drums from the ritual procession drew ever closer.   From the moment that the procession came into the ritual area, the community was caught up in a Spiral Dance led by T. Thorn Coyle with the rest of the ritual facilitators acting as cantors for the opening chant.  The Spiral Dance gave way to the very visceral quarter calling and than to the Trance Journey that had even the facilitators sinking deeper into altered states.  Space became sacred and time slowed as events started to blur. 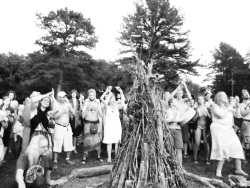 I clearly remember breaking away from the ritual group to fetch the inflatable globe and thinking about how corny it was going to be.  I couldn’t have been more wrong when I hoisted what amounted to a giant beach ball, painted to look like a globe, and brought it into the circle.  Shauna had me hold the globe above my head, and above the crowd, so that people could see it while the chanting was going on.  From the moment that all eyes turned on me I could feel the attention and energy that was pressing on the globe, and by extension, me.  Some people described the nebulous energies of magic as being electrifying or warm, but this was pure pressure, pure weight, as peoples’ attention poured into the globe.  It was at that point that Shauna whispered to me that I should walk around the circle.

It was a surreal thing carrying that globe through the circle.  Hundreds of Pagans in trance locked in their attention on the globe and chanting for the healing of the Earth.  Many reached up in reverence to touch the globe as I passed by them, seeing the living image of Mother Earth, rather than an absurd, giant, plastic beach ball.  As I walked, the globe itself became heavier and heavier and a low vibration came from my hands down to my feet.  I had inadvertently filled the role of Atlas, bearing the sphere of the heavens on my shoulders.  I walked several circuits of the ritual space with the Earth on my shoulders and between the chanting and the energy swirling around; it was all I could do to center myself and walk forward.  I stopped among a group of children near the center of the circle and slowly lowered the sphere to the ground.  It seemed appropriate that the children helped lower the Earth symbol to the real Earth.  Doesn’t each generation pass the world to the hands of its children?

After removing the globe from the ritual circle it became a beach ball again but the power it had as a symbol demanded that I reflect on my experience.  The ritual we had just performed was not a selfish ritual.  It did not ask us to heal ourselves, to request something of the world, to be reborn, or to resolve some inner turmoil.  The ritual asked us to focus outward on the greatest symbol of our faith as Pagans and demanded that we not only revere it but also sacrifice something of our self to it for all we have received.  A sacrifice of intention, attention, energy, hope, and love to both heal the planet and ourselves.