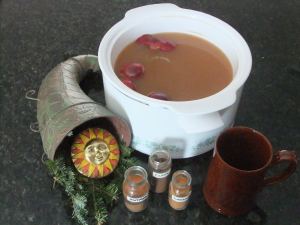 Wassail is a centuries old English ceremonial cider used as an apple tree spirit offering during the Yuletide season to bless orchards and increase their yields. The word Wassail is from the Saxon for "Good Health" and a traditional toast is to hold high a cup of Wassail while exclaiming "Waes Heal!" Making and serving Wassail has been one of my favorite Winter holiday traditions.

Here is my recipe:

Pour a gallon of fresh or refrigerated cider into a cauldron or electric crockpot. Add three cinnamon sticks. Cover and cook over high heat for at least fifteen minutes until the cider becomes hot. Uncover and add one teaspoon each of powdered cinnamon, cloves, and all spice. With a wooden spoon, stir the spices into the cider until they dissolve. Then reduce the heat to medium and cook at least another fifteen minutes. Wash, quarter, and remove the stem and seeds of an apple. Add the apple quarters to the cider and stir. Serve, or reduce the heat to warm and cover until ready to serve.

Wassail is a great beverage for parties. For large gatherings, I use a three gallon electric crockpot and start off making two gallons of cider with triple the amount of powdered spices. Each time a quarter of the Wassail in the pot has been consumed, I stir in more cider and increase the heat for a few minutes. In order that party-goers of all ages can partake, I do not add alcohol to the Wassail I make. However, I have a selection of liquor available for adults to add who want this option. At party's end, any Wassail left over can be cooled and refrigerated. It will keep for several days and can be consumed cold or hot.