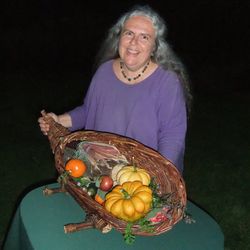 The Cornucopia is also known as the Horn of Plenty. Its name comes directly from Latin -- Cornu (horn) Copiae (abundance, plenty). As a symbol, a Cornucopia is typically depicted as a horn shaped receptacle overflowing with fruits, grains, flowers, and/or vegetables. The word Cornucopia also is commonly used to signify abundance.

Legends about the origins of the Cornucopia come from ancient Greek mythology. One story connects it with the infancy of Zeus, the chief God of Pagan Greece. After giving birth to Zeus, His mother, the Goddess Rhea, and His grandmother, the Goddess Gaea, placed Him in the care of the nymphs Adrasteia and Ida, daughters of Melisseus, king of Crete. They fed Zeus on the milk of the wondrous goat Amalthea. Later, in appreciation to His wet-nurse goat, Zeus placed Amalthea among the constellations in the heavens. To the nymphs, Zeus gave one of Amalthea's horns and conferred on it the magic of perpetually becoming filled with whatever sustenance the possessor of the horn might want.

Another account links the origins of the Cornucopia with the legends of Herakles (Hecules), the son of Zeus and the princess Alcmena. Herakles and the River God Achelous fought each other over Deianeira, daughter of the God Dionysius. In an attempt to win this contest, Achelous shapeshifted into the form of a bull. However, Herakles defeated him and tore off one of his horns. Naiads, who were Water nymphs, took this horn, consecrated it, and filled it with fragrant flowers. The Goddess of Plenty then adopted the horn, and making it Her own, called it Cornucopia.

The Cornucopia came to become a sacred symbol associated with a variety of Pagan deities. In the Roman religion, this included Fortuna, the Goddess of Luck and Fortune; Plutus, God of Wealth; Concordia, Goddess of Peace and Harmony; and Flora, Goddess of Flowers. The Romano-British and Celtic Horse Goddess Epona sometimes was depicted in the form of the Great Mother carrying a Cornucopia. Nantosuelta, Goddess of the Winding Stream, appeared with a Cornucopia on some ancient monuments, as was Persephone, Greek Goddess of the Underworld.

As a ritual tool, the Cornucopia has taken a variety of forms in ancient and contemporary times. Originally, it was in the form of an actual curved horn, reflecting its legendary roots. Over the ages, Cornucopias have been fashioned out of other materials as well, including wicker, wood, paper, stone, metal, and ceramics. Today, most Cornucopias are in the form of curved horn-shaped baskets. In my own collection, my Cornucopia baskets range in size from 6 inches to more than 2 feet in length. I use the smaller ones on my personal altar and the bigger ones for large group rituals and festival community altars.

You can purchase Cornucopia baskets at a variety of places, including gift stores, crafts shops, flea markets, garage sales, and garden centers. After obtaining a Cornucopia, cleanse and consecrate it as you would any newly acquired ritual tool. One way to do this is by blessing it with tools of each of the Elements of Nature: Touch it with a bit of salt or soil (Earth). Annoint it with spring water (Water). Smudge it with incense (Air). Pass it over a candle flame (Fire). And, finally, using a quartz crystal, blessing wand, or other tool of Spirit, dedicate it to its intended purpose and align it with your spiritual practice and the form(s) of the Divine you work with.

Selena Fox is high priestess of Circle Sanctuary. This article is part of a work in progress and reflects her work in combining classical and contemporary Paganis. She began exploring Pagan cultures as a teenager and was a high school and college honors student in Latin and the classics. She led her first public ritual in 1971 as president of Eta Sigma Phi, the Classics honor society at the College of William and Mary in Virginia. She is interested in hearing from others who use a Cornucopia as a ritual tool. Contact her: Selena Fox, Circle Sanctuary, P.O.Box 9, Barneveld, WI 53507; (608) 924-2216; circle@circlesanctuary.org.; home page: www.selenafox.com