1999 Parliament of the World's Religions

The 1999 Parliament of the World's Religions (PWR) was held December 1-8 in Cape Town, South Africa. About two dozen Pagans from the USA, England, Austria, and South Africa were among the nearly 7000 delegates from religions around the world who took part.

Although there were less Pagans attending the 1999 PWR in South Africa compared to the several hundred who were part of the 1993 PWR held in Chicago, an even wider range of Pagan traditions and groups were represented and the Pagan presence was more accepted. In addition, at the 1999 PWR, there was greater collaboration and cohesiveness among the various Pagans who attended. Many of us sat together in plenaries and presentations as well as socialized at meals and on other occasions. Although Pagans stayed at a variety of hotels, on campus, and other locations in and around Cape Town, we stayed connected throughout the PWR. Most of us chose the option of renting cell phones as part of our registration check-in process, and by adopting this widespread South African practice, we were able to stay in touch with each other and rendezvous throughout the conference.

More than 800 workshops, ceremonies, performances, discussions, meetings, and other activities happened as part of the 1999 Parliament of the World's Religions. These were held throughout Cape Town, including on the Cape Technicon campus, Good Hope Center, District Six Stage, City Hall, and University of Cape Town. In addition to "official" Parliament program activities, there were even more adjunct events happening in other locations, including in various hotels, on Table Mountain, and in other parks. 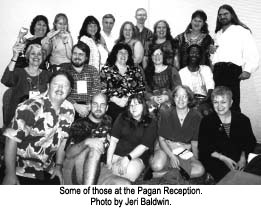 The evening before the Parliament began, most of the Pagan delegates came together for a Pagan reception organized by Deborah Ann Light, Deirdre Pulgram Arthen, and me. It was held at the Holiday Inn Waterfront in Cape Town, where most of the PWR delegates associated with Circle, EarthSpirit, and Covenant of the Goddess were lodging. In addition to socializing with each other, we exchanged contact information as well as planned when and where to meet the next morning.

The presence of the multi-tradition Pagan community of delegates that formed at the Parliament first began to be publicly visible during the opening procession, as we marched together as a group in the larger procession of world religions through Cape Town. Our diversity as well as our unity were apparent. In contrast to many other groups which wore ceremonial garb of the same color and form, the Pagans had a wide range of colors and designs reflecting our various traditions and personal styles. Our unity was apparent in our unison chanting of various Pagan chants. Some chants spontaneously emerged during this occasion, including one that we used to collectively bless the District 6 grounds as we entered there.

Paganism also was visible in the opening ceremony. Four woman spiritual leaders honored the sacred directions, beginning with Wiccan priestess Deborah Ann Light calling the North. An Asian woman called the East; a South African woman, the South; Omi Baldwin, a Native American (Dine), called the West; and another woman bore the Peace torch, representing the Spirit of the Parliament. This ritual made for a powerful beginning to the Parliament.

There were twenty presentations by Pagans and/or about Paganism at the 1999 PWR. Dennis and I jointly presented a "Dreams and Spirituality" workshop plus an EcoPagan talk, "The Dreams of the Mother Earth." In addition, I presented "Brigid: Celtic Goddess, Celtic Saint," plus facilitated a panel on "Women and Witches in Cross-Cultural Discussion."

Other presentations included a "Brighid Meditation" led by Rowan Fairgrove and a presentation on "Sacred Texts and Textualities in American Neo-Paganism" by Sarah Avery. Deirdre Pulgram Arthen, assisted by Sue Curewitz Arthen and others, presented three sessions of "Celebrate the Spirit of the Earth with Ritual, Dance, and Song." Catherine Starr and Rowan Fairgrove spoke on "What is Wicca?" and Dr. Michael York spoke on "Paganism: Serious Religion or Fantasy and Child's Play." Michael also did a presentation on "Theological Considerations of the Proto-Indo-Europeans," and was part of an interfaith panel on an "Assessment of the 1993 and 1999 PWR from a Sociological Viewpoint." Grove Harris spoke on "Witches in the United States and South Africa: A Nuanced Comparison," and Rev. Melissa Ellen Penn did a workshop on "Discovering the Four Paths of Creation Spirituality." Fred Lamond gave an interfaith lecture on the "Social Impact of Different Religions," and Donald Frew was part of the interfaith panel "Critical Issues: Questions for Religions from the 1993 Parliament." Donald also took part in "Calling from the Corners of the World: Dangers and Opportunities for Indigenous Spiritual Traditions." Erin Elizabeth Wells was among the speakers in the Next Generation Plenary session on "Youth responses to The Call to Our Guiding Institutions," and also took part in Next Generation programs in the Assembly.

Parliament wide grand meetings happened during the afternoons of the opening and closing days, and each evening. A Pagan presence was visible at many of these sessions, not only because Pagans from various traditions often sat together, but due to being included in the program. During the first evening plenary, some of my slides of Circle festivals were among those included in the multi-media slide show on Sacred Practice created by the Joseph Campbell Foundation. During the plenary on Sunday evening, December 5, Deirdre and Sue of EarthSpirit and Dennis and I of Circle were among those whose Gifts of Service were acknowledged. And, during the final plenary, Deborah Ann Light, representing Paganism, was among the representatives of world religions on stage.

On Saturday, December 4, I was among eight religious leaders invited to take part in a private interfaith roundtable session chaired by Professor Hans Kuhn, who drafted the "Toward a Global Ethnic" document, which emerged out of the 1993 PWR held in Chicago. At this three hour roundtable, we discussed our perspectives on religion in the next millennium. The session was audio-recorded and photographed. Excerpts have been published in German in a special section in the January 2000 issue of Die Woche.

On Sunday, December 5, Dennis and I, along with eight other Pagans rose before dawn and were among the several hundred Parliament delegates who took ferries out to Rhobben Island off the coast of Cape Town for an interfaith Peace service. A Peace pole was planted at this place, which once was a prison for South African freedom activists and now is a historic center.

Dennis and I were among the Pagans who staffed the Pagans USA information booth at the PWR exhibit area in the Cape Town Civic Center. Circle Sanctuary, EarthSpirit, and Covenant of the Goddess jointly sponsored this booth which consisted of free literature from each organization, plus other materials. Although the Civic Center exhibit area did not get as much traffic as the exhibit area at the Good Hope Center where the daily plenaries were held, a variety of Parliament participants stopped by the Pagan booth, including some religious leaders who were on break from Assembly meetings held downstairs during the last part of the Parliament.

More than four hundred press, radio, television, and internet reporters and other media personnel from around the world covered the 1999 PWR. In addition to secular media people, a variety of religious media journalists were present, including Pagans. Pagan journalists and photographers attended both as delegates and as media. CIRCLE magazine was represented by Dennis (our editor), Jeri Baldwin (photographer), Deborah Ann Light (reporter), Devaddatta (see his article on pages 48-49) and me (reporter, photographer, and media relations). PWR Pagan media corps also included Rowan Fairgrove (press), Deirdre Pulgram Arthen (press), Ed the Pagan (radio), and others.

In addition to being part of the media, Pagans and their religions were covered by the media, from the opening procession through the closing ceremonies. I appeared on national South African television in a special that aired during the Parliament and again in a documentary that aired on the Sunday following the Parliament. I also was interviewed by a variety of reporters, and was among those featured in an interfaith article in a German newspaper. 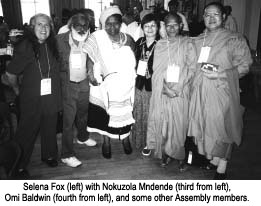 For the most part, media coverage of Pagans at the Parliament was accurate and positive. Following the Parliament, a controversy emerged when a South African newspaper carried an article mentioning that a South African Anglican archbishop and Jewish rabbi criticized the PWR for including Sangoma (healers in traditional African religion) and Pagans as delegates and presenters. However, the comments of these two leaders were countered in the same article by statements by Philip Kubukeli, president of the Western Cape Traditional Healers and Herbalists. Also defending the right of Nature religions practitioners to be included was Nokuzola Mndende, the national chairman of the Council of African Traditional Religion, a member of the Assembly of Religious and Spiritual Leaders, and a member of South Africa's governmental Parliament. She said: "If South Africans are true to their liberation, they must learn to be tolerant. It is the focus of religion to unite people not to define others from one's own perspective." During several breaks at Assembly meetings and at the interfaith roundtable session, she and I discussed the common struggles that Nature religions practitioners of many paths have in getting our religions the same respect as other world religions. 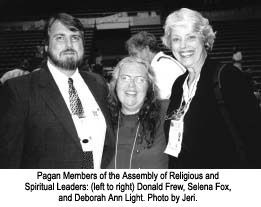 Meeting in conjunction with the PWR was the Assembly of Religious and Spiritual Leaders, comprised of about 250 leaders of world religions appointed to serve by the Council for the Parliament of the World's Religions. In 1999, the Wiccan presence in the Assembly expanded to include Donald Frew and me, as well as Deborah Ann Light, who began serving in 1993. At the 1999 PWR, the Assembly considered the document, "Call to the Guiding Institutions" (http://www.cpwr.org/calldoc.html). Most Assembly members signed it, including Deborah, Donald, and me. The Assembly met in full session as well as in small discussion groups during the last three days of the Parliament. Each Assembly member had the opportunity to develop a project pertaining to one of the aspects of the "Call" document, and to get feedback from other Assembly members as part of discussions. Deborah's project focuses on teaching the practicalities of dying and death. Donald's project is the Lost & Endangered Religions Project (for info, email him: LostRelig@aol.com). My project is the Earth Day Spirit Project, which is archiving and disseminating liturgical materials for multi-tradition Ecospirituality rituals.

The Parliament was important because it not only brought together leaders and practitioners of many religions and many countries, but also because it encouraged practical action in addition to dialogue. Part of the legacy of the 1999 PWR for Pagans are the connections we made with each other and with those of other religions. Especially significant was the networking that took place among Pagans and those of other Nature based religions, including African traditions, Native American ways, and Shinto. The 1999 PWR was also significant because the Craft and other forms of Paganism became a more visible and integral part of the international interfaith community. Many of us who attended are already making plans to attend the next Parliament of the World's Religions (site not yet chosen) in 2004.

Thanks to all CIRCLE subscribers, supporters, benefactors, and others who donated to the Circle PWR Travel Fund in 1999. Your contributions made it possible for Circle to be part of the 1999 Parliament of the World's Religions and aided our work there in developing greater understanding of Paganism among those of other religions.