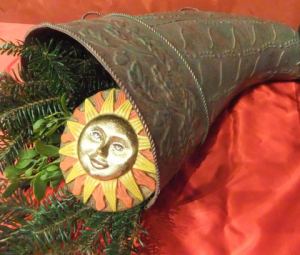 Winter Solstice has been celebrated in cultures the world over for thousands of years. This start of the solar year is a celebration of Light and the rebirth of the Sun. In old Europe, it was known as Yule, from the Norse, Jul, meaning wheel.

Today, many people in Western-based cultures refer to this holiday as "Christmas." Yet a look into its origins of Christmas reveals its Pagan roots. Emperor Aurelian established December 25 as the birthday of the "Invincible Sun" in the third century as part of the Roman Winter Solstice celebrations. Shortly thereafter, in 273, the Christian church selected this day to represent the birthday of Jesus, and by 336, this Roman solar feast day was Christianized. January 6, celebrated as Epiphany in Christendom and linked with the visit of the Magi, was originally an Egyptian date for the Winter Solstice.

Most of the customs, lore, symbols, and rituals associated with "Christmas" actually are linked to Winter Solstice celebrations of ancient Pagan cultures. While Christian mythology is interwoven with contemporary observances of this holiday time, its Pagan nature is still strong and apparent. Pagans today can readily re-Paganize Christmastime and the secular New Year by giving a Pagan spiritual focus to existing holiday customs and by creating new traditions that draw on ancient ways. Here are some ways to do this: