Circle Sanctuary sponsors and supports open Circles at US military installations, including ships, across the USA and overseas, including war zones. Circle Sanctuary also provides Distinctive Religious Group Leader (DRGL) training and endorsement as part of its Circles sponsorship. The Circles and their DRGLs provide spiritual fellowship, study, and ritual. Membership in the Circles is free and is open to Wiccans, Druids, and other Pagans of many paths. For more info, email Rev. Tiffany, the Sponsored Circles coordinator: drgl@circlesanctuary.org.

Sampling of Pagan Circles sponsored (past & present) by Circle Sanctuary 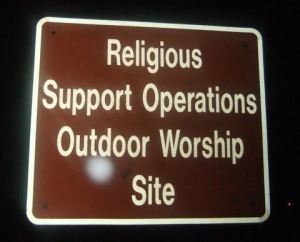 These wallet-sized laminated cards contain a prayer of protection and blessing on one side and Pentagram with American flag on the other. Created by Circle Sanctuary in March, 2003, these cards are available free of charge to those serving on active duty and to their family and friends who keep altars of support for them.

Religious communities all over the world are rallying in support of their Military personnel being deployed to the Middle East. Most agree that in spite of the wide range of differing opinions regarding this war, those serving in the military still need and deserve the spiritual support of their communities at home.

Pagans from many paths and places serve in the US military and are currently among those being deployed. In response to this, Circle Sanctuary is making available Military Pagan prayer cards for those Pagans on active duty. The prayer card includes a graphic and an Elemental blessing on laminated cardstock, and is about the size of a driver's license or credit card, so as to be easily transported in a wallet.

If you, or someone you know is currently on active duty, and you would like to obtain a card for yourself or them, please contact the Circle office:

There is no fee charged for these cards. However, donations to help Circle Sanctuary cover the costs of producing & mailing these cards are welcome and tax deductible in the US. Make checks/money orders payable to Circle. Credit card donations are also accepted and can be made below through our secure online payment system. 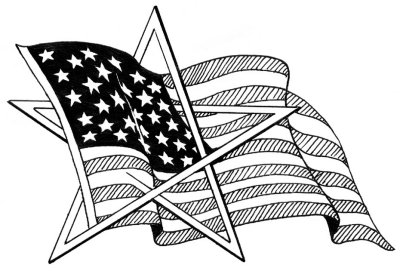 Pagan Military Service Ribbon (PMSR) is a recognition award for Pagans who are serving or who have served in the US Military as well as military forces of allied countries.

Ribbon symbolism is embodied in its colors and shapes.  It is rectangular with six red and six white stripes surrounding a field of blue with a golden acorn at its center.

Ribbons are presernted in ceremonies in-person, and also via internet radio which requires a live call-in.  In order to be eligible for a Pagan Military Service Ribbon, please share the following information with us: 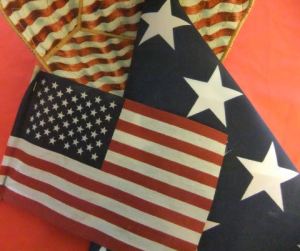 Social network for Pagans who are serving and who have served in the military, their families, their friends & supporters.

Open to Pagans of many spiritual paths & organizational affiliations.

Sponsored by Circle Sanctuary as part of its Pagan Military Support services. 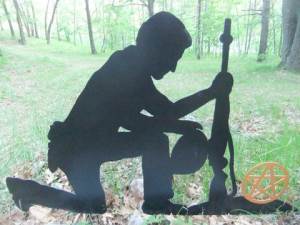 List compiled by Selena Fox of Circle Sanctuary
Current as of November 29, 2011 - Send additions to: circle@circlesanctuary.org
Gravesite for each has a pentacle marker from the US Department of Veterans Affairs 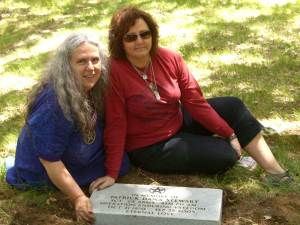 Order of the Pentacle Patch 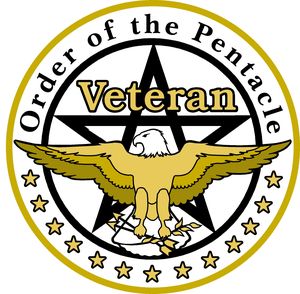 Order of the Pentacle

The Order of the Pentacle is a veterans association of Wiccans and other Pagans who have served and/or are serving in the US Armed Forces, and who have the Pentacle as their emblem of belief.

The Order of the Pentacle was formed on Veterans Day, November 11, 2006 to support equal rights for Wiccan/Pagan troops, veterans, and their families. The Order of the Pentacle actively supported the Veteran Pentacle Quest, which, after a decade long struggle, culminated in success on April 23, 2007 when the US Department of Veterans Affairs finally put the Pentacle on its list of emblems of belief that can be included on grave markers the VA issues to honor deceased veterans.

Click here for more information on the Order of the Pentacle patch.

To join, please fill out all fields in the form below. Information will be kept confidential and for Circle Sanctuary's use only, unless you specify otherwise.

Circle Military Ministries in the Media 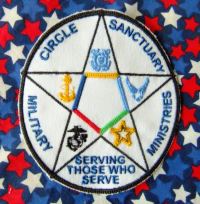 Circle Sanctuary provides a variety of services free of charge to Wiccan and other Pagan veterans and those presently serving in the United States military. Donations of money and supplies to support these services are welcome and are tax deductible in the USA.

Just a few parting thoughts. Less than 5% of all Australians have ever spoken with an Aborigine. The adult literacy rate in Afghanistan is around 29%, and in the same country, some 1.6% of all births lead to maternal deaths. Greece, the mother of a number of pre-Christian faiths, is now an environment that is somewhat problematical for Pagans; the Orthodox Church fears us. Australia as a nation tends to be quite tolerant of religions, and by and large is not at all observant. While a majority is Christian, the weekly attendance at services is about 7%. Proselytizing tends to be much less common than in the States, as it is viewed as rather "odd" to talk about one's religion.

Melbourne is an eminently livable big city. It has a population of some 4 million people, but we've never felt unsafe walking about late at night, and I have noticed that the Foreign Currency Exchange places don't have bulletproof glass in the windows. There's tighter security at the gas station in my town of 7,000 people than for a financial place in a big city.

There are big issues in a lot of places, and none of the answers are simple. The early work of interfaith work is happening, but that's the easy part. That's where you get together with people of other faiths, and find the commonality, and feel good that we're all people in communities who are concerned for others, take care of people, and try to become better people.

That's the easy part. The hard part is where we get together to discuss the parts where we are different, and will not ever agree. Transcendant, revealed religions will never change to become immanent, panentheist and occult, or vice versa. We still need to talk and respect the differences.